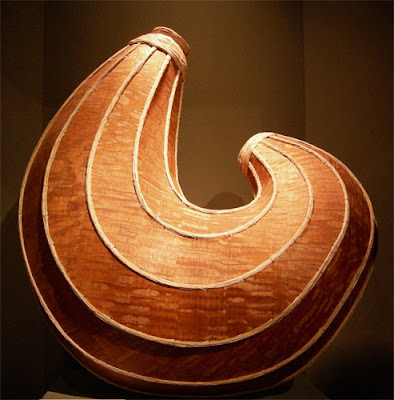 Illustration: Terrol Dew Johnson. Form Over Function #1.
Terrol Dew Johnson started basketry weaving at the age of ten. He soon learned that he was a born natural and found that it was one of the few things in life that he found intrinsically effortless.
Johnson is a member of the Tohono O'odham nation of southern Arizona. The Tohono O'odham have a long history of basket weaving using a whole variety of techniques using natural materials and dyes. These are all used in order to tie the basketry in with the local landscape colours and flora, making the baskets part of the community and of the larger landscape. 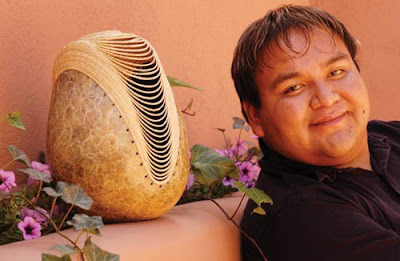 Illustration: Terrol Dew Johnson.
The traditional basketry weaving techniques that Johnson learnt at such an early age, have allowed him to expand into the world of contemporary fine art basketry, while still keeping hold of his traditions, which he uses as a foundation or anchor point for his subsequent career as an artist.
Johnson has definitely turned the craft skill of basketry into an art form. His basket weaving techniques now see him producing work that is sculptural in form, with the pieces quietly but confidently filling their internal and external space. His basketry creations have extended one of the earliest human learned skills, much beyond its original practical remit, and although his creations do still maintain some of the traits of a traditional basket, as much of his work still has the appearance of the functional containers that were woven by early humans, he has been able to play with that notion and that traditional form, producing pieces that although serving no practical purpose, are still able to pay homage to the rich local and wider planetary history of basket weaving. 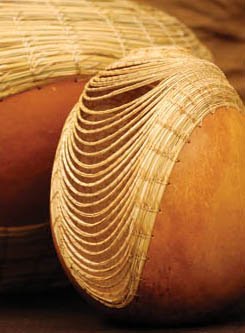 Illustration: Terrol Dew Johnson. Basket.
Terrol Johnson is now one of the most popular basketry weavers in the United States. His work has won major awards and has been seen in various exhibitions across the country. A number of prestigious museums and galleries are now eagerly procuring examples of his work for their collections.
Johnson is now a respected artist who has been able to expand his interests into other creative areas including architecture and photography, but it is his commitment to basketry weaving and more particularly how that can be used to help his Tohon O'dham community, that will perhaps be his greatest legacy. 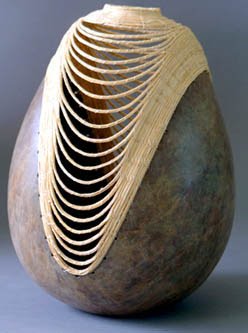 Your work is truly beautiful. I am so happy for you and your success. Your art has evolved and leaves me breathless. I remember when you were in your learning phase. We would make jewelry in my living room at Midvale Park. So glad you have had the opportunities to pursue your dreams.