The Work of the Artist Dex Fernandez 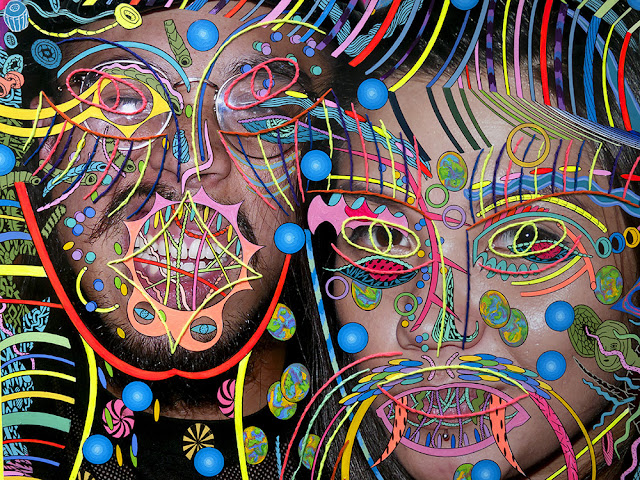 Dex Fernandez is an artist that comes from the graffiti/street art tradition. His work is a creative collision of styles, colors, shapes, lines. He often uses his own digital photographs as a background to a whole panoply of information that is built up in layers onto the base photograph.

These layers can and do consist of abstract pattern, religious symbols, body parts, cartoons, tattoos, to name just a few. Dex plays with these references as he also plays with larger ideas, such as the connection and disparity between high and low art, between history and biology, between beauty and crudeness, and between innocence and sexuality. 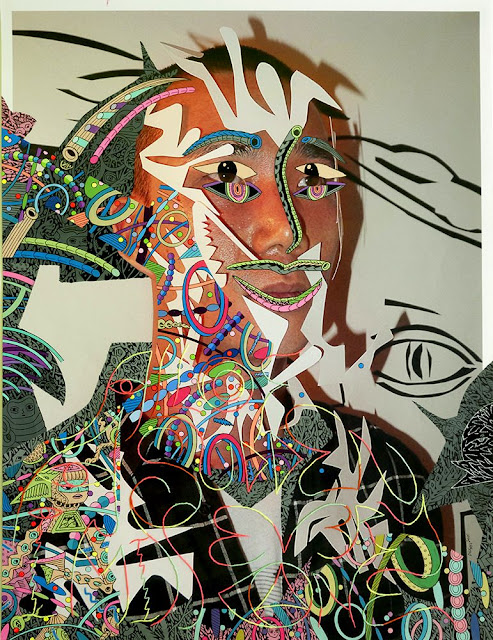 Illustration: Dex Fernandez. All of a Sudden I miss Everyone, 2015. Acrylic, ink, embroidery, on a digital photograph 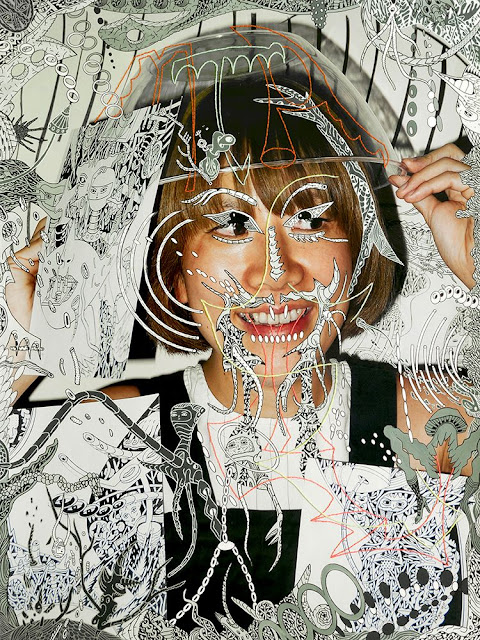 
These are important combinations and complex relationships that dwell within our contemporary society, and they are often ones that are tentatively side-stepped, or deliberately overlooked. It is important for the artist to highlight these most important references to the world we both live in, and perhaps more importantly, the world we pretend to live in.

Dex is able to express himself through a wide range of formats, including wall murals, street sticker art, altered photographs, as well as fashion and accessories, all part of the panoply that is such an integral aspect of our daily lives. The world at large, in all its contrasts and its illusions is Dex's canvas, and his compositions are a reflection of his use of that larger canvas. 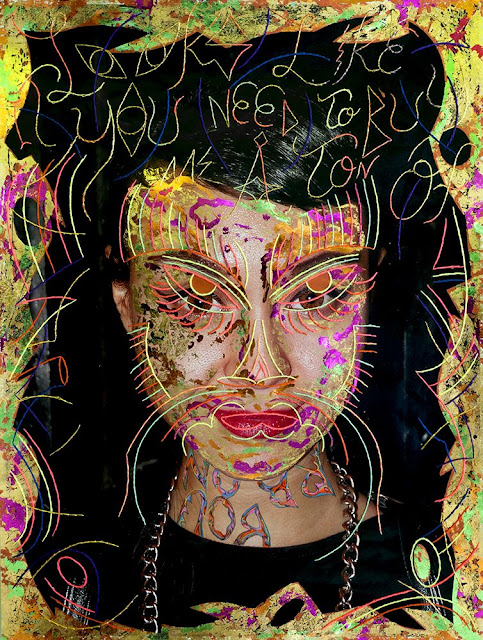 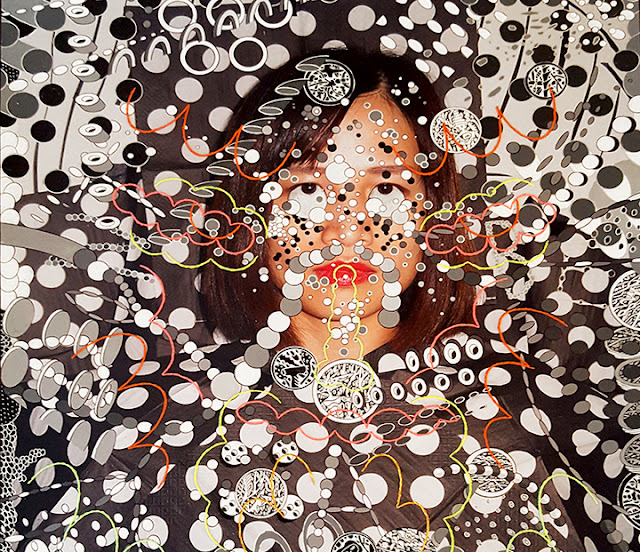 Dex's portraits are extraordinary pieces of work. Originally photos of friends and fellow artists, he hand paints intricate and colourful patterns and shapes around and over the original portraits. The multiplicity of color, line, and symbol helps to create a new visual for the portrait, grafting a new mask, a new identity even, onto the original.

In some respects, the original face becomes more than it was, as if the artist has added a dynamic dimension to the original portrait, expanding the character of the individual so that they seem ready to burst out of their contained portrait within a new heightened persona. 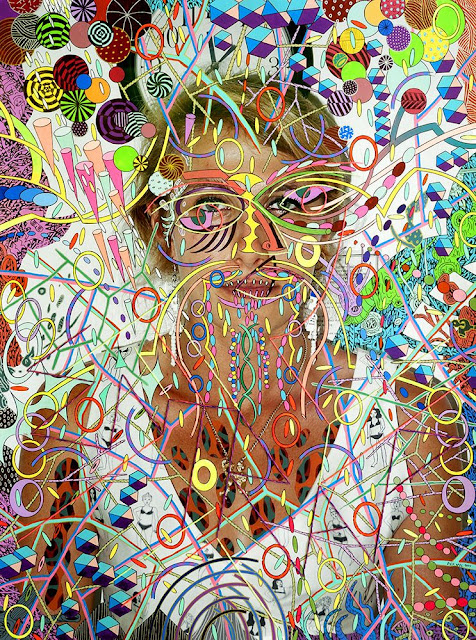 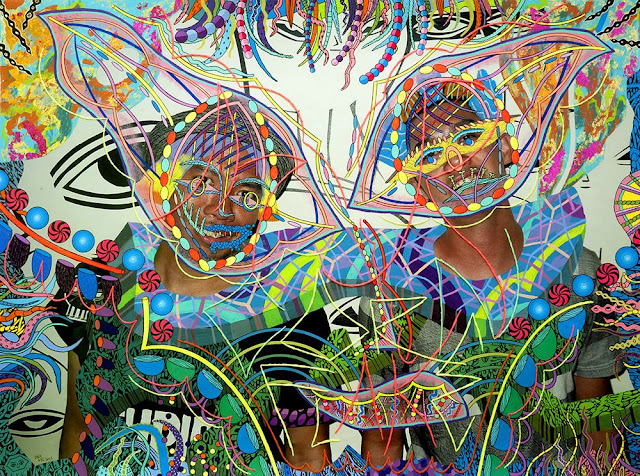 
Interestingly, Dex adds an element of stitch to his animated portraits, often in the guise of bright neon thread that is loosely aligned around facial features, often the eyes. This embroidered embellishment adds one more level of interpretation, or perhaps reinterpretation to the facial character of the individual.

The work shown in this article is part of an exhibition of Dex Fernandez work running at the Owen James Gallery in Brooklyn, New York. Dex has been able to manipulate the gallery in order to enhance and project his work within his own framework. He has covered the main gallery wall with a mural composed of bright neon yellow and black paint, coloured tape and stickers. The collage and mural are encouraged to interact in order to create an installation that is at once a whole entity in its own right, but at the same time has distinct and singular elements, consisting of Dex's portraits, that are separate, but also part of the larger picture. 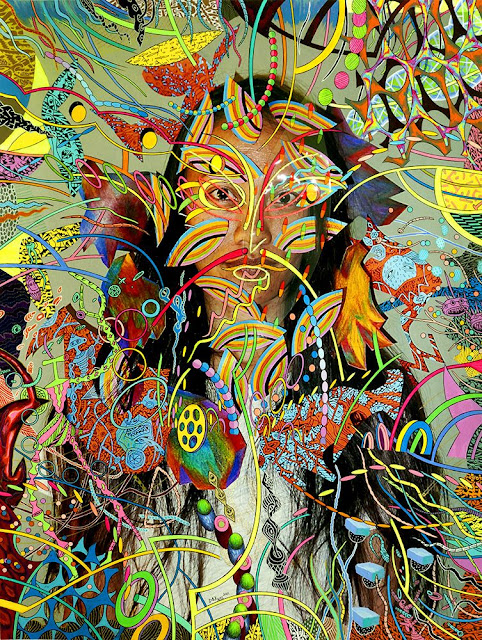 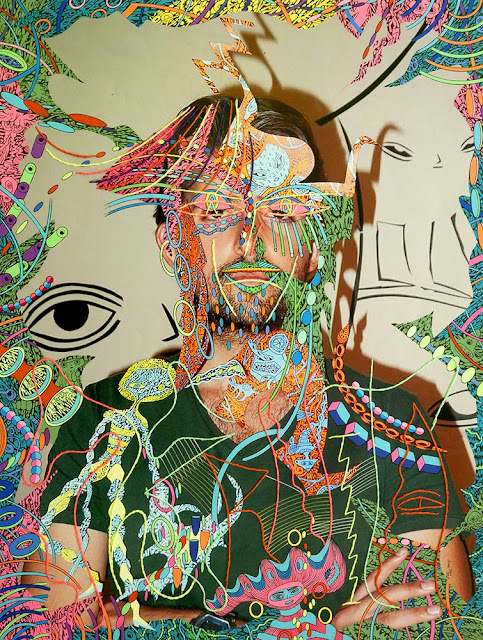 All of the imagery of Dex's work that was used to illustrate this article, was kindly supplied by the Owen James Gallery. Please be aware of this, and do not republish the illustrations of Dex's work without the permission of the gallery. 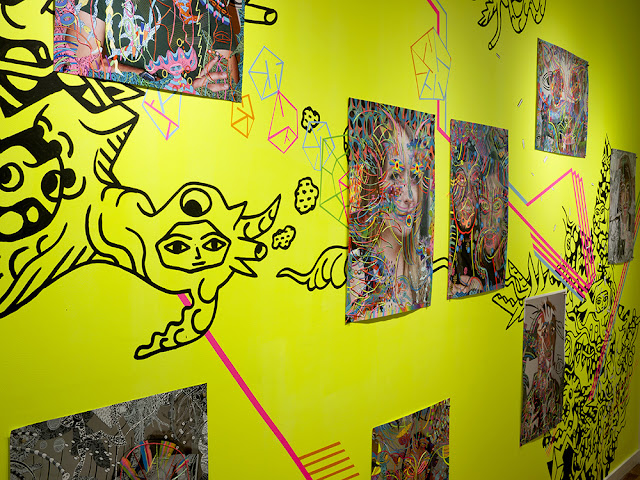