The Textile Artwork of Altoon Sultan 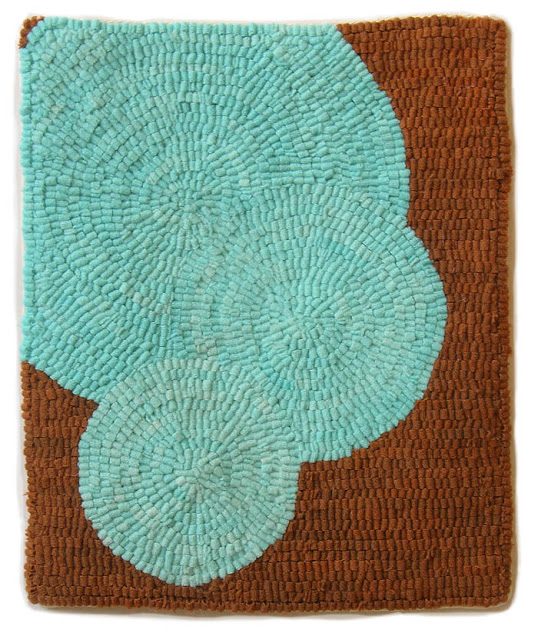 Illustration: Altoon Sultan. Turquoise Circles.
Textile art can take many forms and use many mediums. In recent years a number of craft processes not usually associated with textile art have been incorporated by some of the more enterprising and non-judgemental artists. Some of the skills that have been incorporated into textile art include many that were considered to be the lesser craft skills, most of which were on a strictly amateur basis and have rarely if ever seen any professional aspect to their medium. These include such staples of the amateur world as crochet, macrame, hooked and rag rugging, to name only a few.

Illustration: Altoon Sultan. Boxed Circles.
Hooked rugs have always been seen as belonging to a world of instant necessity and practical need. The skill of hooked rugging was never considered part of any Arts & Crafts revival or even part of a middle class accomplishment package that was expected from every woman before and after marriage. These art and craft packages would usually include such skills as drawing, needlework and weaving, but could include some of the more unusual craft skills such as metalwork and ceramics. Rug making itself has a very high standard of achievement and status. When it was strictly in the field of weave, embroidery or even print it could and was often considered to be an art form in itself. However, rag and hooked rugs were another matter entirely and were rarely if ever mentioned in the same format and were not seen as a skill or part of any other medium. These rugs were strictly the property of some of the lowest and most poorly paid members of society. The skill has therefore been tarnished with an image of low social status and inapproachability. 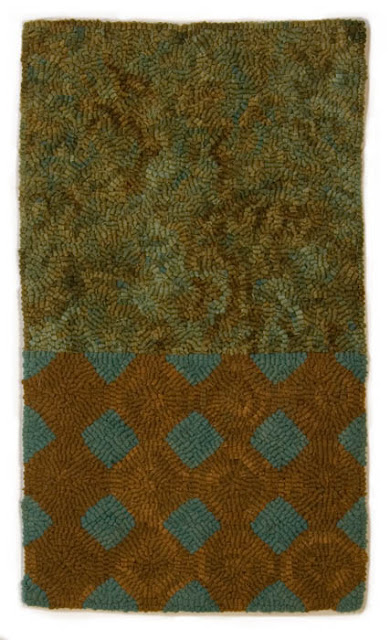 Illustration: Altoon Sultan. Tiles.
Altoon Sultan is a Vermont based fine artist who sees no stigma or prejudice in the skill of hooked rug making and has incorporated it effortlessly into her fine art work as a process of that art rather than as a minor support skill. She has a subtle eye for both texture and colour variation, as can be seen in the images shown in this article, all of which are the work of Sultan. For the artist it is not just a matter of producing a pattern out of the hooking technique, there is also the much subtler use of the direction that the loops take within the composition. Some compositions switch the direction with a change of colour or texture, while others use the change of loop direction in order to add a subtle pattern for the eye to follow. 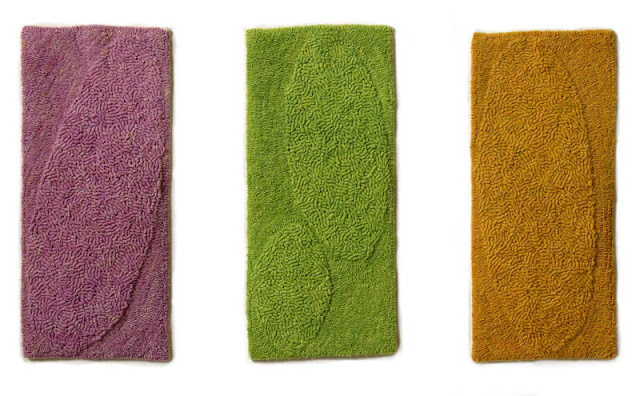 Illustration: Altoon Sultan. Ovals.
Whereas the traditional hooked rug technique used scraps of fabric that could not be utilised for any other domestic use, and therefore were limited as to the range of the creative process, Sultan does not have this problem. Her fabrics can be individually and subtly dyed to produce a close range of colour shades and tones making the work appear both coordinated and connected. Each piece or ruglet, is an individual and unique process, from initial sketch and composition, through to the dyeing and hand picking of fabric strips, to the actual making.
These pieces are not rugs and cannot be placed on the floor. They are art pieces for the wall only. This is not to say that Sultan finds that there is something embarrassing about the medium or the skill involved in hooked rug making. It says much more about her being able to see the medium outside its narrow confines, often narrowed by outside elements rather than within the medium.
By highlighting the work of Altoon Sultan, it shows that no process within the textile world should be considered lower and less significant than another. All are processes that were learnt and handed down across generations and all have value. If we start to rationalise and grade the differing skills and techniques that are part of the large and varied world of art and craft textiles then we are also guilty of rationalising and grading the generations of people who, usually through necessity produced and honed those skills in the first place.


Illustration: Altoon Sultan. Blue Circle, Red Triangle.
Altoon Sultan has an interesting and comprehensive blog where her thought processes and methods of work can be seen in much greater detail than I have shown here. Her blog Studio and Garden can be found here.
The images were used with the kind permission of the artist.
Reference links:
Altoon Sultan blog
Posted by John Hopper at 16:07:00

I am all about texture, and I can't seem to get Sultan's "Ovals" out of my mind. What an incredible piece of work! I checked out her blog, as well, and the photographs of nature on her blog made my eyes practically pop out of my head! I really need to get to know her work a little better. Thank you for posting!

John, the best yet! I really love these. So, when is the book coming out? There is a book in this, but you know that, I assume.

we liked your collection & designs..

Glad that you all liked the Altoon Sultan post. I personally thought that her work was intriguing and that perhaps others would too, so I'm glad and heartened by the response.

As to a book, I think there is one bubbling away, I just need to pinpoint the subject exactly.