Textile Artist Deborah Gregory and the Cycle of Decay and Renewal 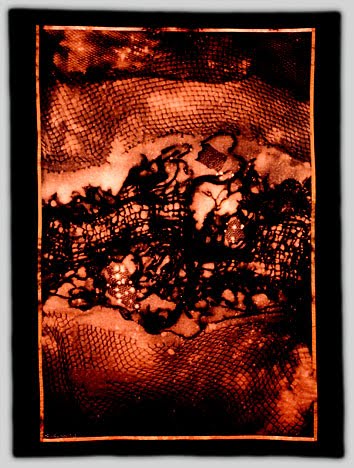 Illustration: Deborah Gregory. Choices and Pathways II.
An interesting phrase that could perhaps be used towards an explanation of one of the main themes of Deborah Gregory's work is that of the natural cycle of decay and renewal. Across her portfolios of textile work is the recurring theme of decomposition and the aging process that is so much an integral part of the lifecycle of nature. However, tempering this inevitable death and decay that affects every living organism, is the eventual rebirth through the raw materials produced from that death.
The great aspect of this universal and sobering theme is the fact that Gregory can choose to interpret the cycle in any number of ways, from the birth, death, and rebirth of an individual, to that of the continuing cycle of the seasons as seen from a shoreline, a group of trees, or a range of animate or seemingly inanimate objects. 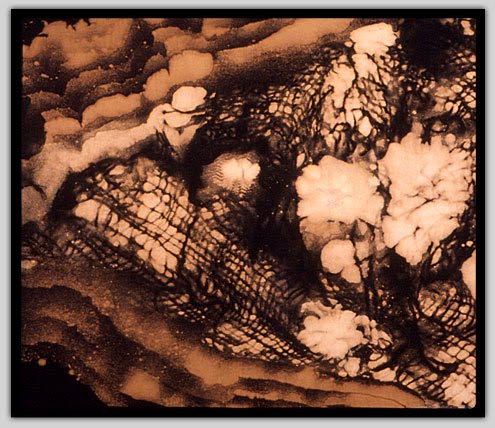 Illustration: Deborah Gregory. Genesis.
Gregory's work should not be seen as morbid, dwelling on the inevitable corruption and destruction of life, but should be seen instead as a celebration of the endless possibilities that the natural world entails. Gregory informs us through her work, that what can be alive and vital at one moment, can inevitably decay at the next. However, the basic ingredients of life remain; inevitably become the building blocks of the next life and a whole succession after that.
This cycle is clearly shown in a number of Gregory's pieces; no more so than that in Choices and Pathways IV where it appears as if the old meshed framework is giving way to strong new vertical shoots that have germinated within the old system. This inevitably creates a new cycle that reproduces endlessly as it has done before this frozen moment that Gregory has seemingly captured. 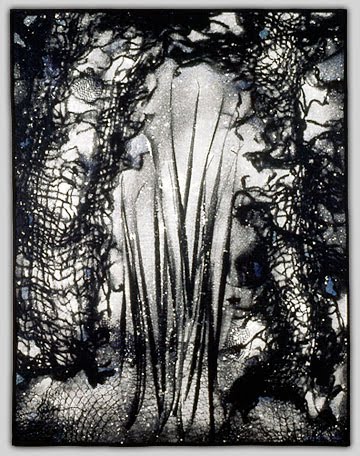 Illustration: Deborah Gregory. Choices and Pathways IV.
Gregory's work has stepped away from the portrayal of colour and texture, as she deals more intimately with the much deeper and problematic ideas concerning the levels and structure of the natural world. This is at a level that we are not always aware of and are often unable to explore freely. Ultimately it depends on the individual whether they wish to interpret Gregory's work as reflecting that of the continual changing of seasons from the birth of spring to the decay of autumn, or whether to delve deeper and try to understand the much more complex movement and reasoning of the natural world, through that of the cycles of life and death, decay and rebirth. 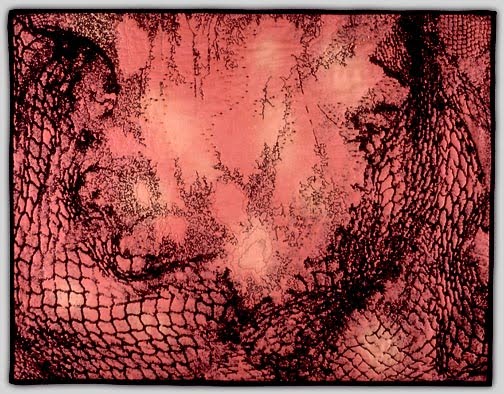 Illustration: Deborah Gregory. Particle and Wave.
Whichever you choose, Gregory's work has a defining and obvious spiritual content. Her work has the capacity to make us stop and think. We are often encouraged to see ourselves as individuals outside of the realms of much of the natural world. However, it is sobering, but also refreshing for an artist to show us schemes on a much grander scale of which we are an integral part. We live in the cycle of life, but we are also of the cycle of life. We are wheels within wheels. 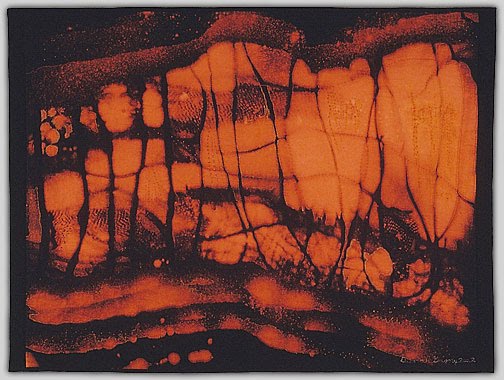 Illustration: Deborah Gregory. Passage.
Deborah Gregory has shown her work in various exhibitions across the US as well as in various other parts of the planet. Her work is included in numerous private collections, but unfortunately not mine. Gregory also has a comprehensive website where much more of her work can be found, including explanations as to the meaning and inspiration of her work. A link to her website can be found below in the reference links section.
All images were supplied with the kind permission of the artist.

I find Gregory's work interesting, mostly for its "message," but try as I might, I can't seem to connect to the aesthetic loveliness of it all. I find the same thing happens with some of the high art music I've studied. I love Schoenberg's "Aesthetic of Ugliness" as it pertains to music philosophy, but to listen to his music somewhat grates on my nerves.

Hmm....Maybe I just need to delve into Gregory's work a bit more.

I really like her work, though I do understand what you mean. It is sometimes difficult to appreciate the sentiment and enjoy the outcome at the same time, as in your example of understanding atonallity but not liking it.

However, I do find Gregory's work has been very clevery arranged to give us examples of the wheel of life and it makes me nod in agreement, so perhaps it is filling a need on my part.

Any information on how these are made? Its impossible to tell from the images! I am curious about the process that leads to these amazing results.

It would probably be best to contact the artist, though she may well not be willing to give exact details of her work.