Wen Redmond and the Complex Nature of Observation

Of all the images and work produced by textile artist Wen Redmond, I have chosen a sequence of work produced by her over a couple of years. An observational and emotional tie to the theme of the tree links the images together, but it is perhaps her wide ranging and varied working methods that make the link all the more apparent.

Redmond is an artist that has strived to incorporate some particularly personal elements into her work. Photography seems to loom large, but it is the personal nature of observation and an emotional link with the subject that has guided the artist. An artist with a camera is a powerful combination. They tend not to randomly choose subjects that may prove useful at some point in the future, but are guided more to that of  individual elements within the environment, elements that are not always explainable individually, but become segments of a composition that may well be built up over a fairly considerable time period, or could well fit into place at an early stage of the creative process. 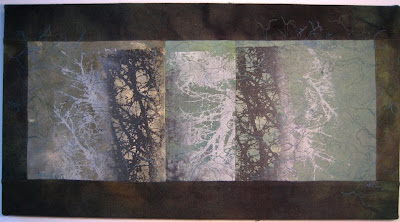 By taking her own photographs and then printing them onto various textile formats, Redmond is able to control a much wider aspect of the emotional attraction that her work instils in the observer. Although only part of the process, it is an intrinsically important one. The layers of painting, dyeing, and stitching overlap the initial observation, helping to guide and support the composition so that many more aspects of Redmond's bond with the subject matter, becomes apparent.

Although abstract in nature, the narrative in each of these examples of Redmond's work is still very much linked to that of the real world around us. That the artist has chosen to show us much more and at a number of different levels, including colour, texture and dimension, allows us a glimpse at least of the thought processes, both analytical and emotional, that powered that initial photo opportunity, an opportunity that is at the root or foundation of the complex composition that has been built around and over that initial creative judgement. 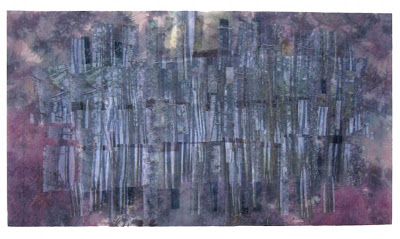 One of the most important aspects of Redmond's work is the question of observation. What is observation? How many aspects or plains of thought are involved when looking at a tree for example? By observing the complex nature of Redmond's work, we are made aware that what we observe around us contains a whole raft of layers full of meaning and context. We are aware that we are observing a tree, but so much more information is gathered at the same time. We are usually unaware of the depth of our understanding of one initial focus of our eyesight, but Redmond shows us through her work, the process that is continually being played out between observation and evaluation. Our eyes may well be open, but are we really seeing? 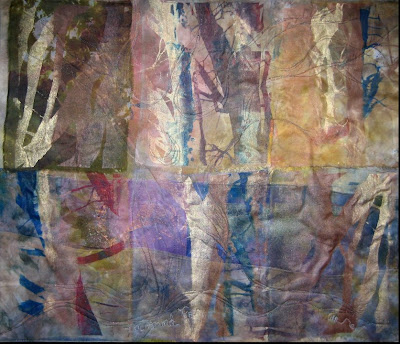 This is one of the fundamental tools of any artist, allowing us to see what we really see. That Redmond has successfully achieved this aspect through the often difficult medium of textiles is doubly in need of praise. Her work will allow us to reach levels in which we can observe her understanding of observation.

Wen Redmond has exhibited her work since the mid-1980s and received various awards along the way. She has a comprehensive website where much more of her work can be seen and she also maintains a regular blog where those interested in her creative and thought processes, can follow her work. 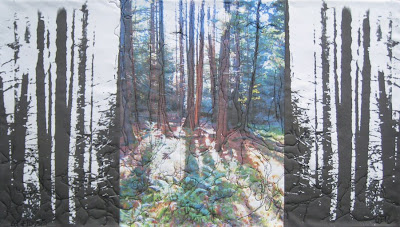 All images provided with permission of the artist.

I'm seeing Wen's work all over the place these days! Congratulations, Wen! The first photo you used was voted most popular on our Fiber Focus Group a week ago. Wonderful.

Nice review on a lifelong body of work.

Wen's work is complicated, yet simple, with a purity of vision that brings the viewer in for a closer look. It lingers in the mind and calls us back for more. It shows us the delicacy of nature.

Terrific write up on Wen Redmon's work. You have really captured it. Nancy

Thank you for your comments regarding wen Redmond's work.

The next textile artist to be featured will be Sandra Woock.

Wen's work is wonderful online and absolutely stunning in person. If you have the chance, most definitely see her work in person.

Wonderful article and work. Thank you for posting

Thanks for your comment Cheryl. I hope you take a look at some of the other contemporary textile artists that have been featured on The Textile Blog, they can be found on the Textile Artists tab at the top of the page.