The Textile Art of Linda McCurry - Colour, Texture and Pattern 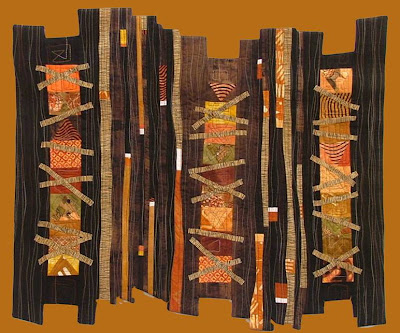 Illustration: Linda McCurry. Tork.
By Linda McCurry's own estimation, she has been involved in textiles ever since she was able to reach the foot pedal of a sewing machine, and it shows. Here is a lifetimes experience collected from a number of professional guises in the worlds of fashion, pattern prints, and ultimately textile art.
McCurry has brought all the elements of her career into the textile artwork she now produces. There is much going on in the pieces that I have chosen to show in this article. Included are copious amounts of dynamic and energising compositional work, tied together with the experience of constructional tailoring, along with a very knowledgeable and balanced approach to surface pattern and mark-making.
Illustration: Linda McCurry. Tork, Bridge to Hope.
It is the combination of McCurry's experience in the tailoring and pattern making areas of the textile world, which seems to have added so much to the depth and experience of these compositions. There is a timeless, almost primal quality to the overall appearance of the compositions, which inevitably leads you to question whether the work is inspired by the natural world around us, the internal world of our own thoughts, or indeed an element of both. Her own dyed and textured fabrics add so much to the overall nature of her work and her manipulation of the tailoring of colour, pattern and texture is very finely tuned.
There seems to be a large and persistent reference, at least in colour, pattern and structure, to the early human world. One that was full of myth and meaning, coloured by texture and gesture. These compositions seem to show us an element of a world that though seemingly forgotten in the largely urban structure of the twenty first century, is still only just out of reach, just beyond the senses of most of us.
Illustration: Linda McCurry. Tork, Bridge to Hope (detail).
The vertical structure of the main composition signifies the powerful appearance of construction, as if each creative piece was a stand alone three-dimensional sculpture. This dominance of the vertical, shown in both layering and stitching could appear overpowering and even severe in some cases. However, the clever use of a number of small diagonal and horizontal aspects of the composition, throws the vertical off-balance allowing the eye to roam over the whole composition instead of being fixated with the vertical. The ploy works and is very effective in calming down the composition to that of an element of contemplation and introspection. 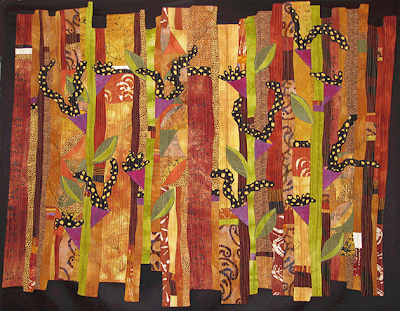 Illustration: Linda McCurry. Veeds.
It is notoriously difficult to make textile compositions work and work well. Both balance and optical interest have to be observed, with the subject being engaging enough in colour, texture and pattern. Enough indeed to make the piece memorable in a world of so much instant gratification and visual overload. That McCurry succeeds and succeeds well is a testament to her incomparable judgement and skill.
Linda McCurry has exhibited her work extensively across the US. She also holds classes in both colour theory as regards quilting and a number of dye classes. These can all be found, along with many other examples of her work, on her comprehensive website, which can be found below in the reference links section. 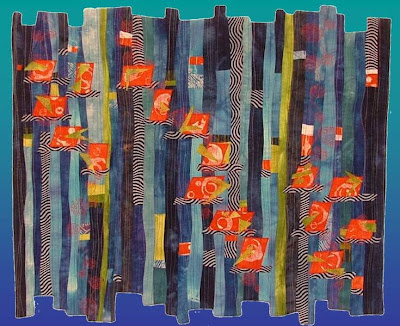 Illustration: Linda McCurry. Water Haiku.
All images were used with the kind permission of the artist.
Reference links:
Linda McCurry website
Posted by John Hopper at 16:05:00

Thank you for introducing us to Linda's superb textile art! Her use of color, shape and stitch is mesmerizing.

These are the Great fabric design.

Thanks for your comments. The next textile artist to be featured will be Erin Wilson.