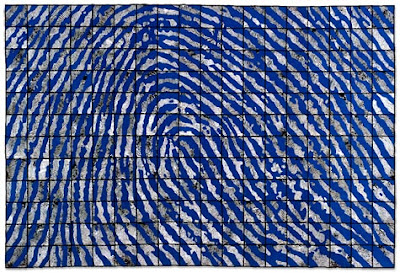 Illustration: Barbara W. Watler. Fingerprint series #50: Unity.
The textile artwork of Barbara W. Watler is intriguing in more ways than one. She gives us blown up images of small, intimate areas of life that we might well recognise as belonging to part of the near micro world. Through her unique imagery of the natural world that she sees around her, the artist allows us to connect to the intimate and the solitary, pinpointing the stand alone elements that make all aspects of the natural world unique. She helps us to understand how utterly unique and diverse this world really is. 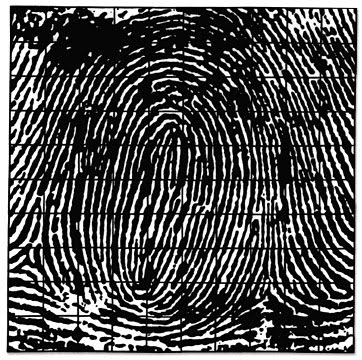 Illustration: Barbara W. Watler. Fingerprint Series #46: Vortex.
Watler has a number of differing projects and sets of work, but probably her most well known series is that of her Fingerprint collection. This series of art pieces that now number more than fifty, is continually growing and transforming as it develops. It deals with the all too human twin obsessions of identity and the loss of that identity. Fingerprinting is a near unique aspect of our human world, one that cannot be quantified, packaged, or mass-produced. It has been a unique feature of the thousands of generations before us, the six and a half billion of us today, and of the thousands of generations that will follow us. In some respects these are large abstract maps of our own individuality, showing us that we are more complex than we often appreciate. 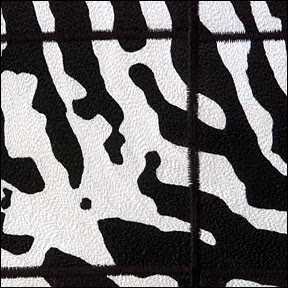 Illustration: Barbara W. Watler. Fingerprint Series #46: Vortex (detail).
By concentrating on this aspect of human development she has in fact pinpointed, through compositional means, both a uniqueness that is such an integral part of the ideal of the individual, and through that the uniqueness that can easily be attributed to each of her works in this series. All are unique and all stand alone. This one of a kind perception underlines and matches the same values that can be found in the human species.
Watler takes the simple idea of honing in on a small element of the human body and expanding it to utterly fill a composition. However, although the idea itself may appear to be simple, it is full of meaning and sophistication. By highlighting the seemingly inconsequential aspect of the end of a finger and allowing it to fill a compositional space to the edge, the artist gives the fingerprint the emphasis it has always had in nature, but which is so frequently neglected in our own human world.

Illustration: Barbara W. Watler. Fingerprint Series #16-20: Painter's Prints.
The uniqueness of each and every one of us is often underplayed and trivialised even amongst our own species. We have become, over the last century and a half, standardised consumers. The retail, financial and media empires regularly bracket us within spending and lifestyle parameters. To class us as individuals within our contemporary world is counter productive. It is a world that no longer values our uniqueness, but sees us as part of the mass production machinery.
Watler gently reminds us that although we may well be part of a mass organism of six and a half billion units, each of those units is a specifically unique, never to be repeated individual. For us to forget that fact puts our humanity in jeopardy. 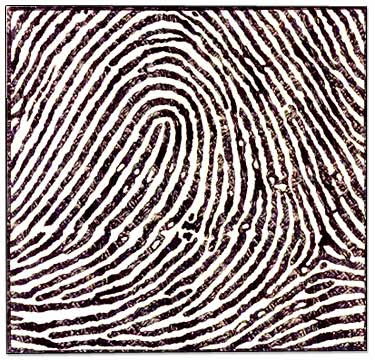 Illustration: Barbara W. Watler. Fingerprint Series #42: Elephant Print.
Barbara Watler work has been seen in various exhibitions across the US. Her unique style, both within the Fingerprint series and beyond, has proved both popular and successful. She has a comprehensive website where much of her work can be seen, a link to which can be found below in the reference links section below.
All images were used with the kind permission of the artist.
Reference links:
Barbara W. Watler website
Posted by John Hopper at 17:51:00

at once simple and complex
and exquisitely beautiful

Thank you for your comment. The series of articles on contemporary textile artists is ongoing, the next artist being Karen Stiehl Osborn.

I am new to your blog. Barbara Watler's work is so elegant. I look forward to exploring more of your artists which appear to be high quality and original. Bravo!

Thanks very much for your comment, which is of course appreciated.

I am hoping to possibly open up the site again to more contemporary work by artists and makers.