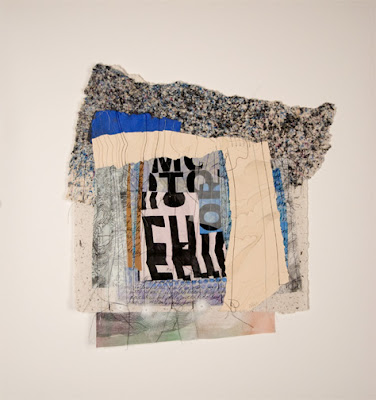 Illustration: Judith Plotner. Adirondack Journal I.
Many creative journeys are supremely private; others less so, many are degrees in between. The work of textile and mixed media artist Judith Plotner, although largely falling into the former category, can still be considered purely as an example of the rich world that can be composed from the elements that go to make up a mixed media base. 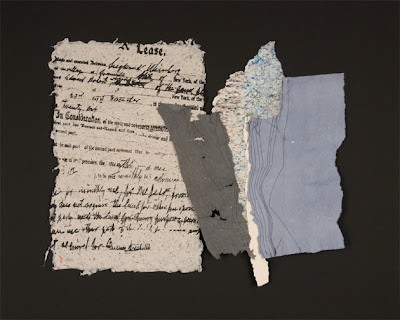 Illustration: Judith Plotner. Slate Valley.
Plotner uses the broad spectrum of the creative arts, bringing into her compositions the sensibilities of a fine art painting background, as well as that of printmaking, collage and textiles. The great strength of mixed media is the fact that layering and juxtapositioning can be achieved not only with the raw materials available within the different mediums, but also with that of mediums themselves. It is always fascinating to observe how sometimes a medium can complement another, while at other times the opposite can be both the aim and result. This can cause tension within a composition, which can be intentional on one level, but have reactions and unforeseen results, sometimes on more than one level. 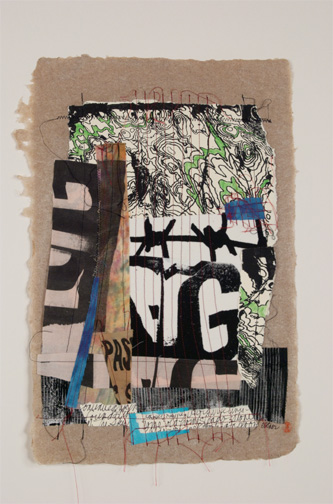 Illustration: Judith Plotner. Adirondack Journal III.
The compositions chosen for this article seem reminiscent of small contained packages as if they were enclosed personal observations of the artist themselves. In some respect, that is exactly what they are. These observational diary pages if you will contain information, thoughts and muses, often scattered and seemingly random, though often connected by both the individual and the experience.
There is a sense of confinement that is physically attached to the compositions. The surrounding and inert space of these observational essays can seem to isolate the experience, but in fact, it is much more a case of the outside space allowing the artist to pinpoint an experience. This helps to discover and identify the completed observation and in some ways allow the outsider to study at least some elements of the parameters that contain the thoughts and processes of the artist. 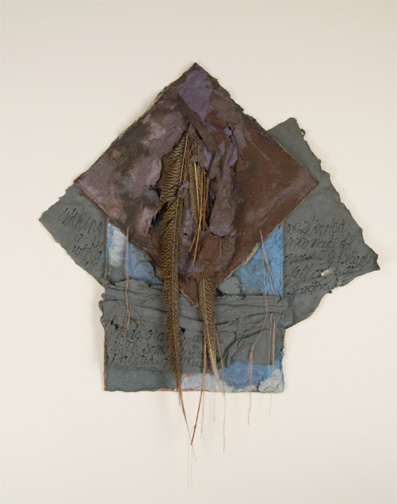 Illustration: Judith Plotner. Autumnal.
Although the outside observer is not privy to the internal creative workings of the artist, whether that be personalised or externalised observations and encounters, they can in some respects be privy to the journey itself. By understanding the practical application of mediums and materials, whether that be through layering, stitching, stamping, dyeing, painting or printing, this functional part of the creative journey can be both observed and admired.
It is said that all creativity is subjective, and in many respects that is true. However, often the practical working journey of materials and processes used by the artist can be objectively followed, sometimes producing profound or at least interesting analogies and discoveries.
These five compositions of Plotner's are finely tuned and specifically composed. They are an interesting example of both the personalised experience of an artist, but also of the sometimes complex procedures that can entail the practical application of a mixed media artist. The compositions are wide ranging in their use of mediums and materials and show the genuine creative scope that can be found within the mixed media world. 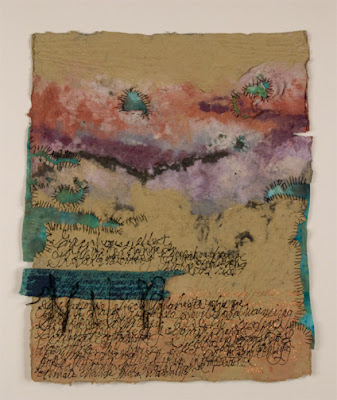 Illustration: Judith Plotner. Global Warming.
Judith Plotner has exhibited extensively across the US. She has her own comprehensive website where many more examples of her work can be found. A link to the site can be found below.
All images were provided with the kind permission of the artist.
Reference links:
Judith Plotner website
Posted by John Hopper at 17:54:00