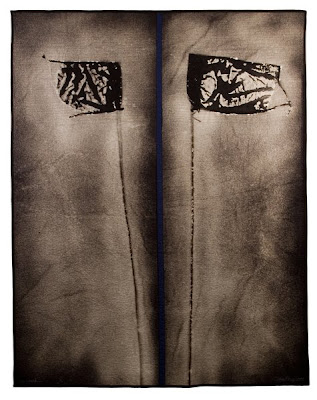 The New Zealand textile artist Clare Plug has spent the last few years of her career developing a fascinating body of work that entails intimately observed details along with wider conceptions and observations of the most rarely visited of all the planets continents.

In 2006 Plug was lucky enough to visit the continent of Antarctica as part of a fellowship, staying with the official government Antarctica NZ at Scott Base in the vicinity of the Ross Ice Shelf. It is no small exaggeration to say that this experience fundamentally changed her views and the entire aspect of her work, so much so that much of the textile art work that she produces to this day is haunted by this most spectacular and hauntingly beautiful continent. 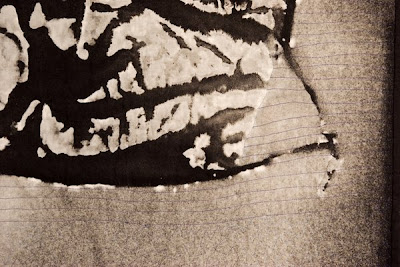 The three works shown here are examples of Plug's Antarctica Series which explores a number of aspects of the continent from the fragile and relatively recent human experience, to the much older and grander sweep of geological and climatic history that has become so pressingly relevant in our own contemporary world.

Through discharge dyeing, applique and quilting techniques, Plug has been able to not only detail her own experiences along with those of others past and present, but perhaps more importantly to focus our attention on the emotional ambience of the landscape and the sense of harsh beauty that it entails. Through her sensitive use of textural colour and stitching, the artist can help us to identify the strange combination of a climate that is so harsh that it can kill most life forms, while at the same time being supremely fragile, delicate and sensitive and so easily prone to destruction by outside forces. 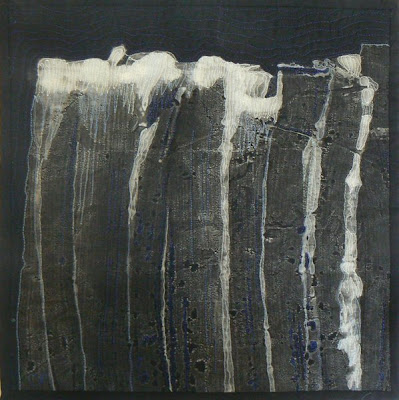 These moody and sometimes even ethereal textile pieces are in many regards emotionally observed landscapes. Admittedly, they can only give us an indication as to the multiple experiences that would be observed on the continent itself. However, Plugs work has such a defined ambient compositional quality to it that although most of us will probably never visit the continent itself, we can at least share some of the wonder and sheer magnetism of this most intriguing and other-worldly part of the planet.

Through her landscapes, both climatically and geographically based, humans seem to make only the barest and most tenuous of impressions. No more obvious an example of this underlying feeling is Out on the Barrier which seems to give a hint of a hauntingly indistinct portrayal of a possible human symbol, or not. To show our lack of domination of one continent out of seven, everything in Antarctica seems transient, misleading, even misdirected seeming at times to be playing tricks on our senses and our preconceptions. The physical and emotional scale of the experience seems well beyond the human scale in which to focus, catalogue and identify. This often featureless and unimaginably empty continent challenges us to imagine a world where the human species cannot automatically deem themselves dominant, and for our own sanity that feeling of inadequacy mixed with awe, can only be for the betterment of us all. 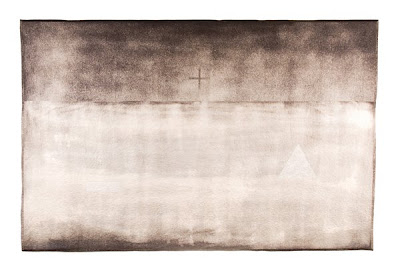 Illustration: Clare Plug. Out on the Barrier, 2008.

A wide range of Plug's textile art pieces were part of the Look South exhibition held at the Canterbury Museum in Christchurch New Zealand. This exhibition was due to continue until the end of September. However, due to the major earthquake experienced by South Island, the exhibition has had to disappointingly close early, though I am sure Plugs hauntingly beautiful textile work will be seen at many more venues in the near future.

Clare Plug has a web presence where much more of her work can be seen. She has exhibited in New Zealand, the US and Europe as well as being featured in a number of publications. Another interesting site listed is that of Antarctica NZ which gives details of New Zealand's official work in Antarctica as well as information on Scott Base where Plug stayed in 2006. On the site there is a webcam of the base which updates every 15 minutes. Both sites can be found in the Reference links section below. 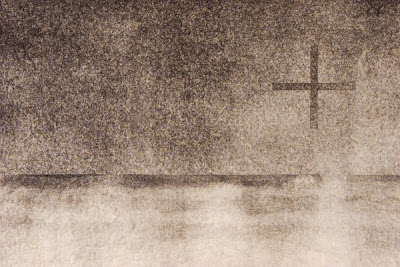 Illustration: Clare Plug. Out on the Barrier (detail), 2008.

All images were used with the kind persmission of the artist.

Two of Clare's works are now part of the permanent collections held at Canterbury Museum in Christchurch.

I really liked this review. I have always found Clare's work haunting and moving. She deserves all the recognition she gets.

Thanks for your comment Jenny. I really enjoyed writing the article and love Clare's work.