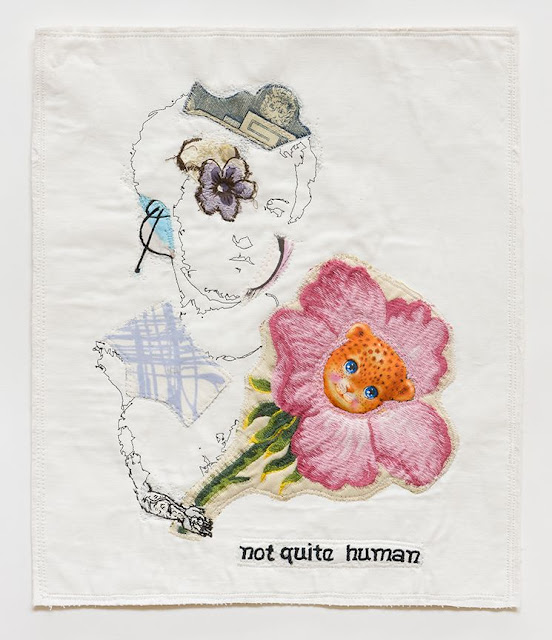 
China Marks is an artist that was originally a sculptor, but over the years the artist has moved into textiles, and now produces a range of individualistic fabric-based compositions.

China is best known for her large format drawings, which take the form of fabric collages. Source materials for these collages often include an eclectic range, such as old commercial tapestry reproductions of historical paintings, pieces of found fabrics, various embroidery pieces, and general ephemera.

Over long periods these eclectic raw materials are cut up by China, then formed, added to, removed from, and reformed, the process being repeated over and over, until both materials and process produce the desired effect that she wants to see within a composition. 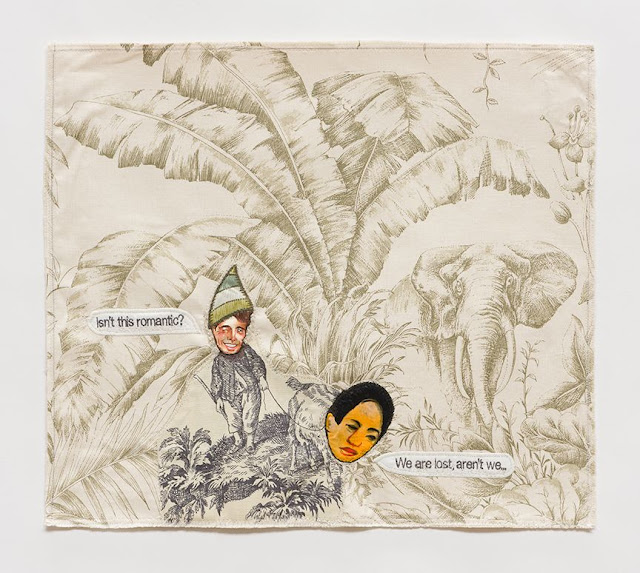 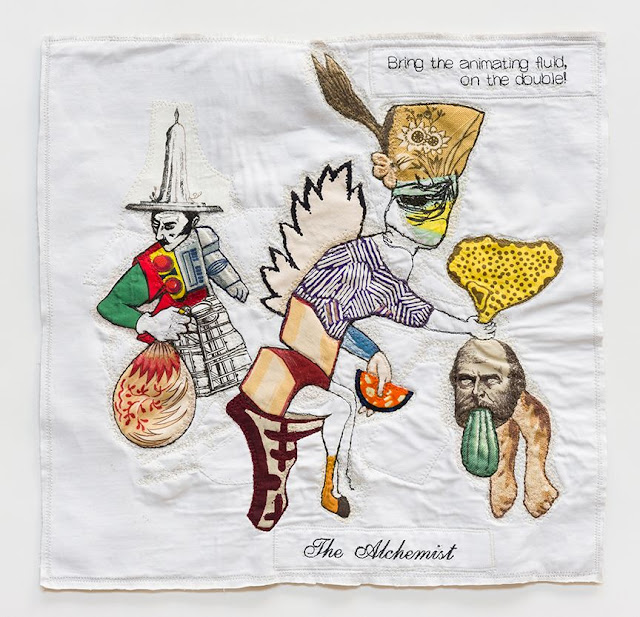 The result of China's ongoing creative manipulation, eventually produces a range of surreal characters and creatures that inhabit equally surreal landscapes. With the addition of humorous and mocking text, which she also sews into the work, the resulting fabric drawings become a strange combination of collage, traditional needlework craft, surreal fantasy, and an almost Monty Python-like humour.

China's work, which has been brought together for her current exhibition, which runs at the Owen James Gallery, Brooklyn, New York from February 27 till March 27 2016, is a selection of the artist's work that has been chosen from both her “Broadsides” and “Short Subjects” series, ongoing projects which the artist has developed over the last three years. Although smaller in format than her larger pieces, these present drawings are not merely smaller versions, they differ considerably from the dense construction of her larger works. 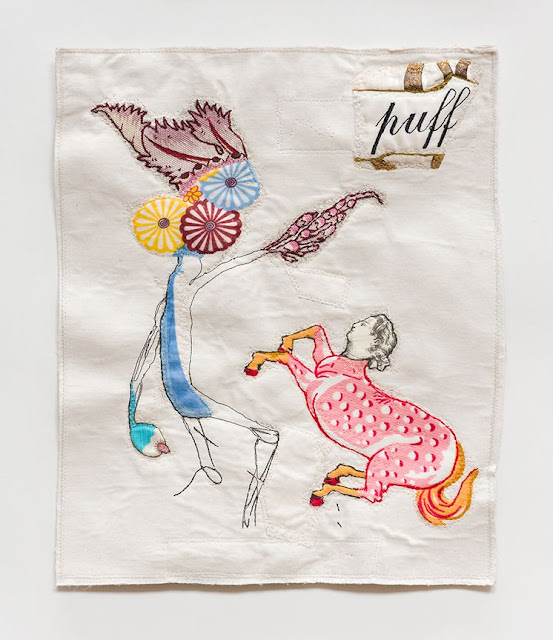 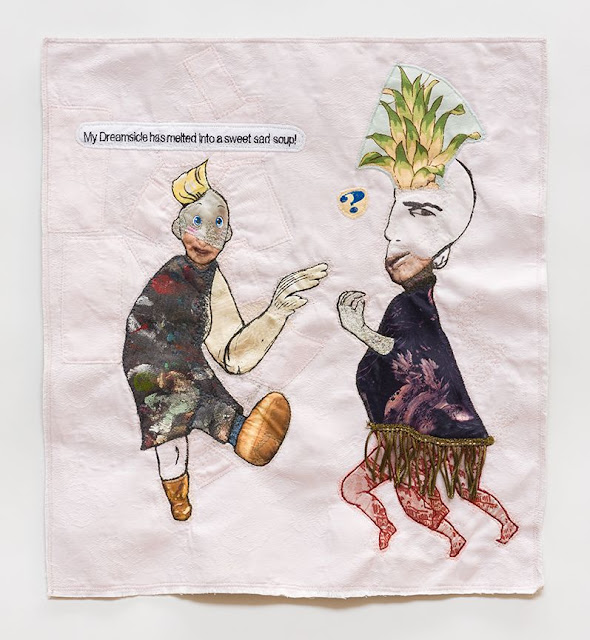 The "Short Subjects" are constructed on a clear plain white or off-white background. Initially intended by the artist as thought-pieces, or visual proverbs, they have developed into their own visual style. China begins each Short Subject with a scanned line drawing, the resulting digital file is then processed through CAD software.  A computerized embroidery machine sews out a rough guide of the drawing in running stitch onto fabric. The artist then builds on that guide, adding additional fabric pieces and embroidery. Sometimes parts of the original drawing will be covered over, sometimes it will be enhanced or transformed into a new character all together.

As the artist forms and reforms the images, a story or situation develops in her mind, and phrases and conversations that arise from that development are also digitized through the computerized embroidery machine. These are then in turn sewn into the work, sometimes with the addition of found objects or trinkets, and the composition is then set. 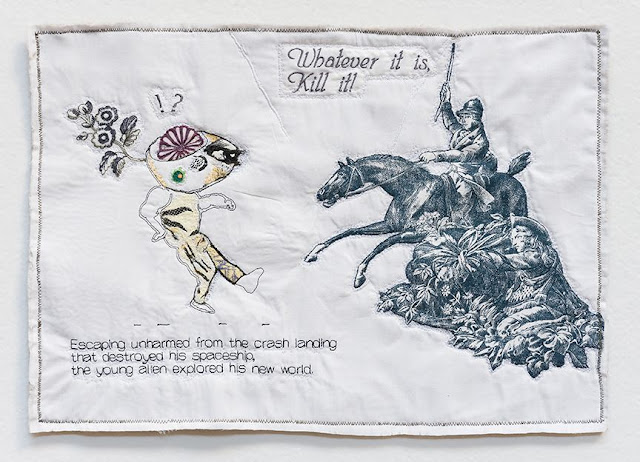 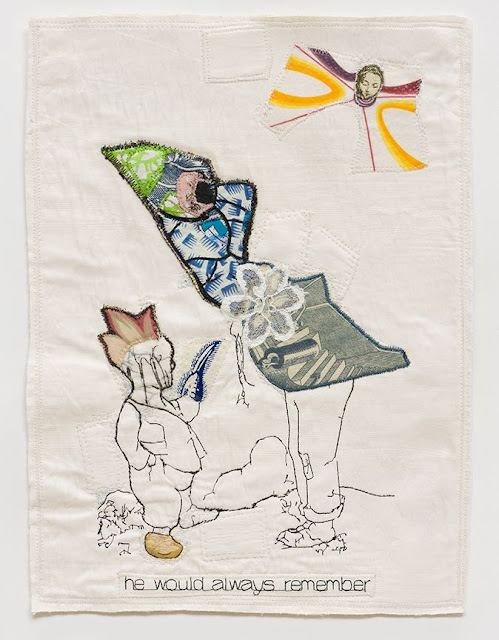 China's text additions to her work, are integral and vital to the story, they can also be witty, ironic, and playful. Examples include: “I am going to Hell at a local motel. And I’ve packed accordingly” and “Heard about the psychotic squirrel who thought he was a washing machine?”

The title for each of China's compositions is purposely different from the text you read within it, the titles adding an interesting poetic dimension, so that titles such as “All Kinds of Lost”, “Winter Comet” and “Better Living Through Chemistry” give pause for thought when looking at the differing work.

In combination with the "Short Subjects" are a number of pieces from the "Broadsides" series. These are similar in scale to the other series, although the Broadsides differ in the respect that they are more streamlined and are primarily text-based with occasional illustrations. 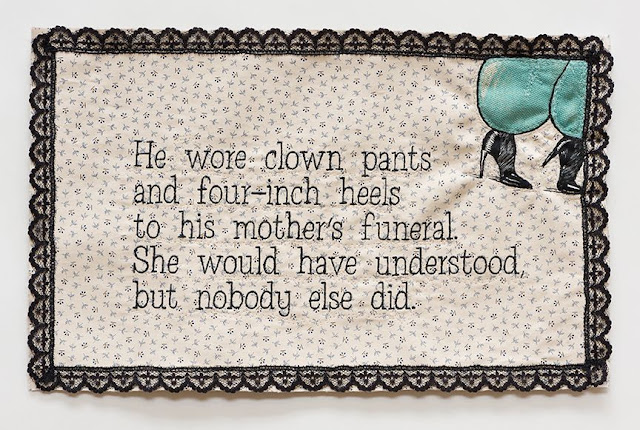 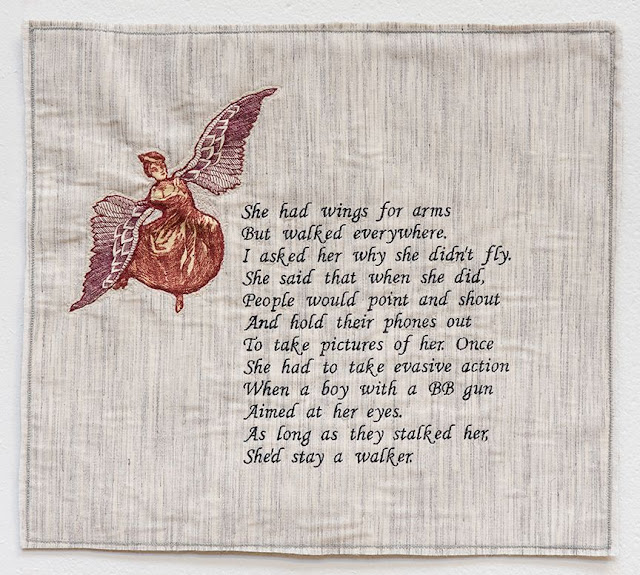 Although the narrative image doesn't play as big a role in this second series, the effect of the compositions are equally witty, focused, and often poignantly observational. In one composition, a man wears clown pants and 4-inch heels to his mother’s funeral. In another, a woman has wings for arms but chooses to walk everywhere instead.

A third part of the exhibition derives from China's series of fabric-based artist books. These beautifully sculptural books contain much the same image density as the artist's larger tapestry-based drawings. In "A Book of Horses", there is a highly decorative landscape of traditional English fox hunting, which includes riders that have duck heads and horses that have tiger legs. Larger figures and insects hover over the landscape, producing a highly original metamorphic scene.

This fascinating and entertaining exhibition is on at the Owen Jones Gallery from February 27 - March 27 2016.

Please be aware that all imagery of China's work, was supplied with kind permission by the gallery, and should not be reproduced without permission. Thanks. 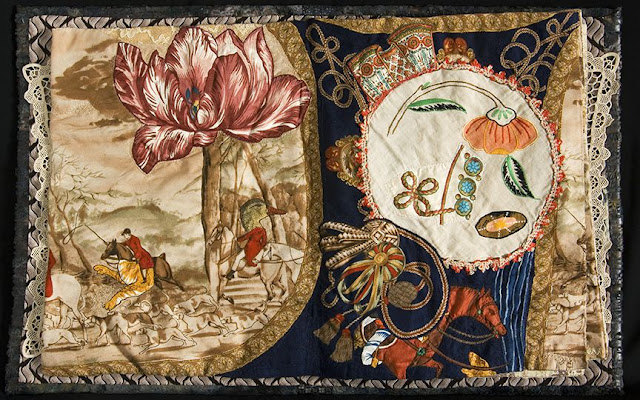