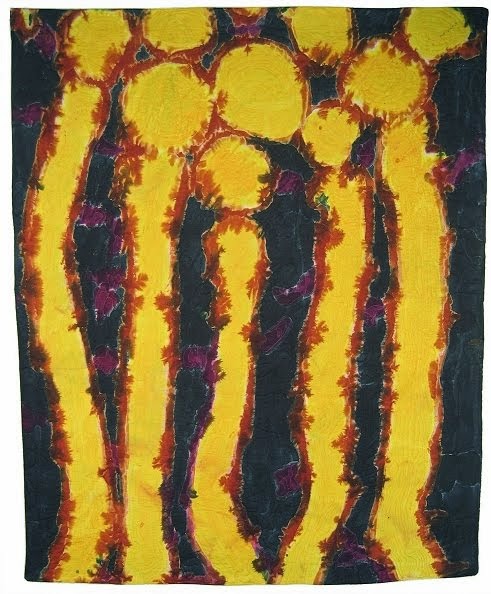 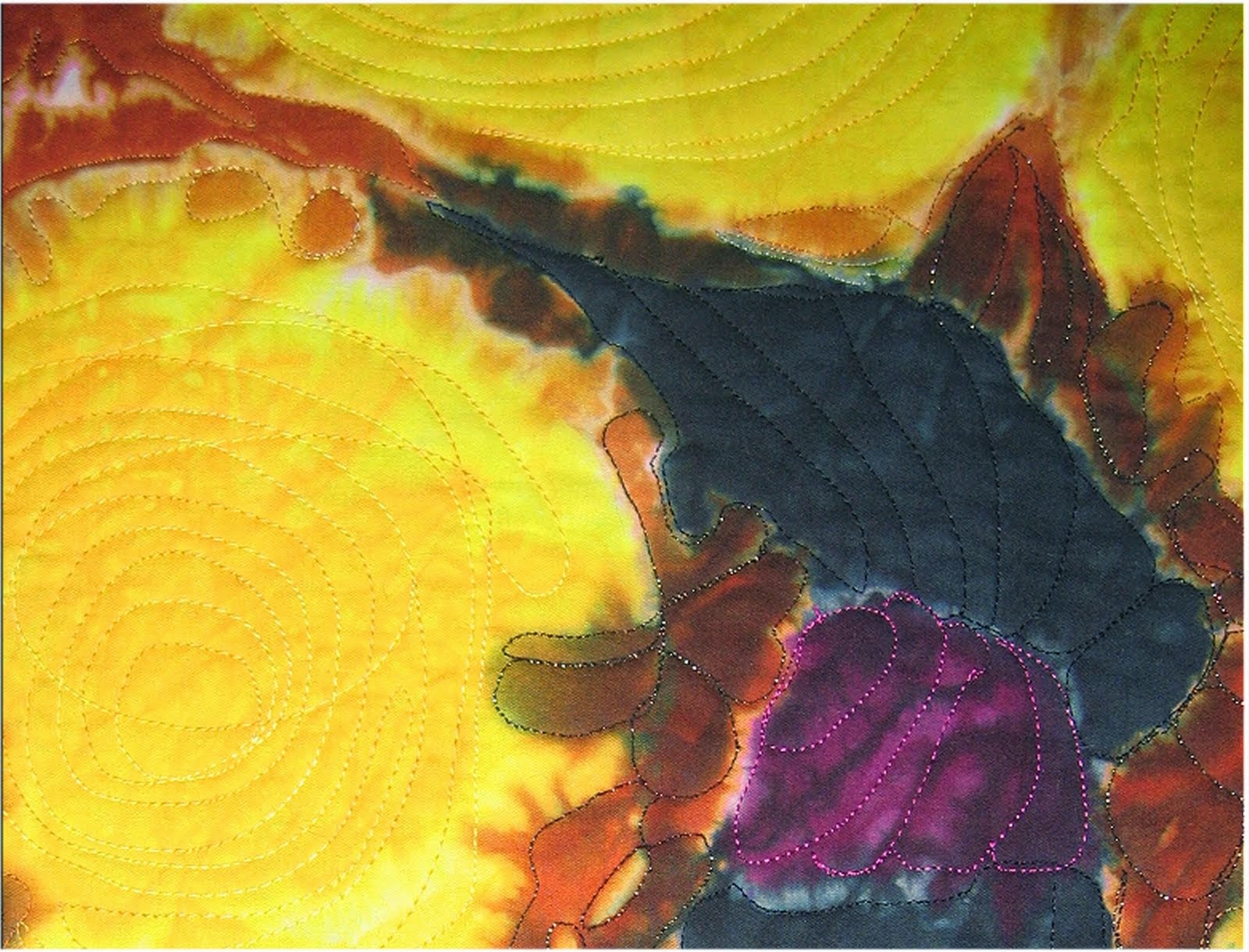 
I was actually looking for work by another artist altogether today, when I came across the intriguing work of Deborah Lacativa. I have become an instant fan and therefore decided to write a post dedicated to her instead of the original artist that I had been looking for.


Lacativa is an American artist from Georgia (the state not the country). She deals very much in the genre of textile art, using dye discharge techniques, along with free form stitching, to produce pieces of art work that are really not meant for anything but display purposes. This is not a criticism, as I personally believe that textile art deserves a place in the fine art pantheon. Unfortunately, it is very often either dismissed altogether by those with a vested interest in the narrow confines of the fine art definition, or placed within the large undefined world of craft. 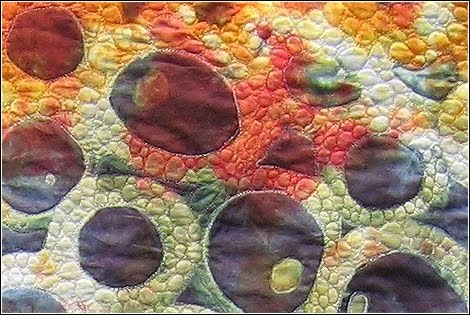 Lacativa's work uses an extraordinary use of colour, shape and texture with much of her work appearing more like a primal dreamscape than that of an exercise in colour and texture. It would not be hard to draw certain comparisons and analogies to the imagined mythical and magical spirit journeys of early humans, though Lacativa has definitely been able to create her own vibrant coloured world in which to inhabit.


I have only given a small sample of this extraordinary woman's work. The examples shown are my favourites, though it is quite difficult to choose between them. I am particularly fond of the richness of colour and deep primal qualities of these compositions. They are also intriguing when seen from a distance or in close up, which is definitely not an easy feat.


These art pieces are so much more than what I have always expected from quilting, even in its loosest description and designation. There are many more examples of her work that are available for sale on her comprehensive website, which can be found here. She also has a number of blogs highlighting various new works and directions. These can all be found at the reference section at the end of this post and are well worth a visit, if not bookmarked. 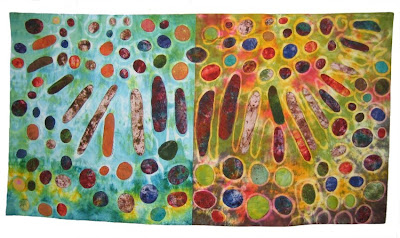 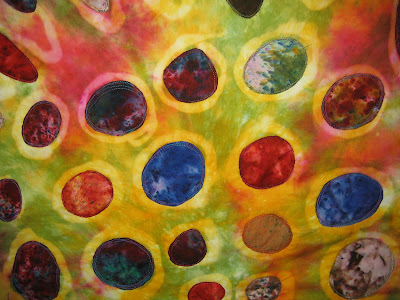 Although very loosely based on traditional quilting techniques, Lacativa's work goes well beyond the confines of that discipline. However, having its roots in the quilting genre her work has been able to give that discipline an artistic outlook, stretching the genre of quilting to its very limits. Perhaps some traditional quilters would not see her work as sitting comfortably within their genre, but I think this unlikely as quilters tend to be a fairly flexible bunch of people who allow all sorts of directions and innovations within their discipline.


Lacativa has shown her distinctive style of work in various exhibitions and venues across the US. It can only be hoped that it is only a matter of time until, at some point in the future, her work can be seen in Europe. 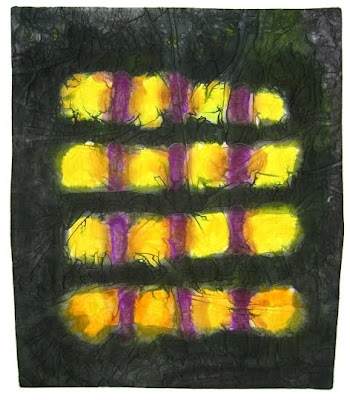 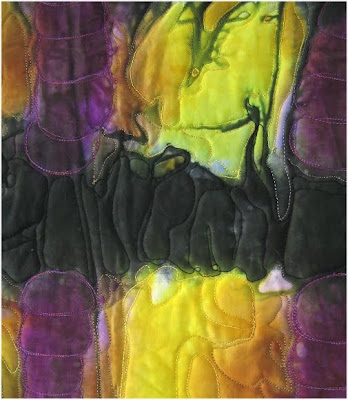 i knew there was a reason i gave up 'textile' creations.

this and after 7 years on one embroidery, you get sick of it.

I have always enjoyed textile art. I was never really very keen on producing fabrics for industry and am not very commercially motivated, though I can do it if I need to. I enjoy the open ended creativity that textile art can give you.

Thanks Morna. I am glad that you enjoy Lactiva's work as much as I do.

thanks for the wonderful review of deb's work, she is a fav of mine.

I've "known" Deb a long time--this review gives me a fresh perspective on her work, and makes me want to revisit all of her work again!

Thanks for all your comments. I have only recently come across Deborah Lacativa's work, but I can see that some of you have been fans for a while now.

There is so much information on the net now that it is often hard to see the wood for the trees, as they say. Often finds like these are by accident. I consider this to be a very happy accident.

I'm also a big fan of Deborah's work, and the owner of some of her wonderful hand dyed fabrics, which I incorporate into my own work. I'm so pleased to see her featured here, as she is an original talent who deserves wider exposure.

Not only is Deb Lactiva an exceptional artist who allows herself to 'play' while she passionately works, she is an intelligent and encouraging human being. Deb often comments on other blogs with refreshing insight.

Thank you for a wonderful article about her work. I am going to return to this blog again.

I had no idea when I posted this article, what a fan base Deb Lactiva has. It is not suprising of course, as her work well deserves the support.

Thanks very much for your comment. I hope you will return to The Textile Blog as there are many more interesting topics and articles that I would love to cover.

John - I love your blog - it is on my "For love of fiber" blogroll on my blog. You do amazing research - I just love seeing the items you show. Thank you!

And, yes, you are correct that Deb has a well-deserved, devoted following!

Thanks for your kind comment. I hope you enjoy reading future posts of The Textile Blog, as there are a lot more subjects to cover.

Hi John,
I really appreciate your writing. I wished if i had seen your blog earlier....