Brenda H Smith and the Strata of Landscape 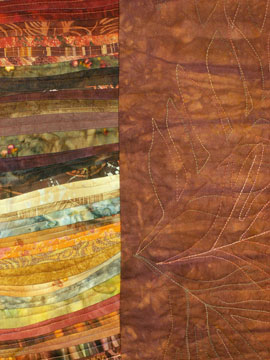 Illustration: Brenda H Smith. Strata 3, 2006.
The textile artwork of Brenda H Smith deals largely with the landscape settings and environment of her native northern Arizona. Through a system of colour tones, textures and pattern, she is able to breathe life into the textile medium that she uses, infusing it with the in-depth characterizations of the environment that she experiences around her. 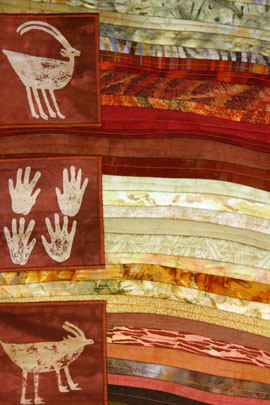 Illustration: Brenda H Smith. Betatakin, 2007.
One of the themes of Smith's work and the one I have chosen to highlight in this article, is that of geology. However, to be more specific, it is the layering of strata that the artist incorporates so effectively into her work. That is the process whereby different coloured and textured layers of silt, sand and mud are set down on top of each other over a time period that is so vast that it belittles our four million years or so on the surface of the planet. It is the geological map of the history of the planet, as well as the contours and undulations that that history has placed on the present landscape, which gives Smith the inspiration for these particular art pieces.
Following the contours of the history of the land as well as the contours of the present environment, has allowed Smith to produce compositional pieces that can engender a multiple and indefinite number of scenarios in both colour and texture. Her work can be seen as a study of the long history of the planet and how its very nature impinges, or even complements our contemporary world. However, it can equally be seen as a grand celebration of colour and texture for its own right. 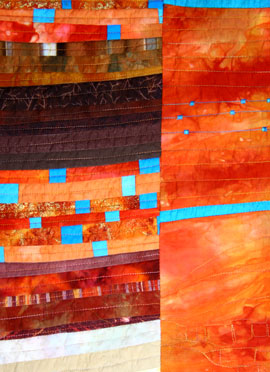 Illustration: Brenda H Smith. Strata 7, 2008.
It is a joy to see so many earth tones and natural textures within the same compositional series. The geological landscape has infinite variations and that variety can sometimes be overpowering in its complexity. However, Smith takes each and every layer and gives it a separate but conjoined identity, so that each strata can be experienced as a unique lesson in colour and texture, while adding to the compositional identity of both the subject and its artistic and creative result. 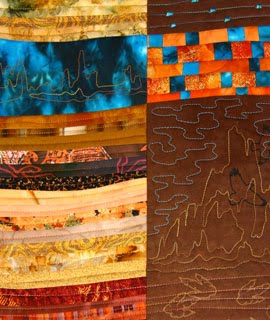 Illustration: Brenda H Smith. Strata 8, 2008.
Brenda Smith has exhibited her work throughout the US, as well as having her work published in various periodicals. She has a comprehensive website where much more of her work can be seen. The link to this site can be found below in the usual Reference links section.
All images were used with the kind permission of the artist.
Reference links:
Brenda H Smith website
Posted by John Hopper at 18:21:00

Good post, thanks for introducing me to Brenda's work.

ooh, that punch of blue.

Wow, I just finished a piece that uses geological strata as the theme. I glad I finished it before I read about Brenda's work!! I would feel as if I were copying!!

Thanks for your comments regarding Brenda Smiths work. The next textile artist to be featured will be Dominie Nash.

Thanks John. I've exchanged e-mails with Brenda before. It's great to read a little more about the work of the "other" Brenda Smith, art quilter.

It must be an interesting confusion to have in the art quilt world, two Brenda Smiths, an H and a G!