Terry Jarrard-Dimond and the Art of Spatial Awareness 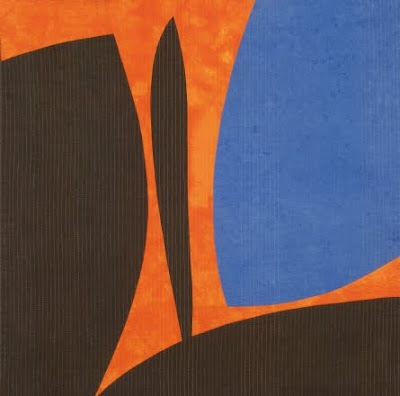 Illustration: Terry Jarrard-Dimond. Crush.
The work of textile artist Terry Jarrard-Dimond is one of precision both in colour and in line. It is not surprising to learn that the artist worked 3-dimensionally as a sculptor for many years before coming to textiles, as these five pieces by the artist shows. Each composition has a level of understanding and consideration for real penetration of the surface level, giving a natural feeling of depth rather than that of a superficial and stylised interpretation of 3-dimensions. It is fair to say that a creative artist with sculptural experience has a better understanding of spatial awareness and an intrinsic feel for dimensions and planes. 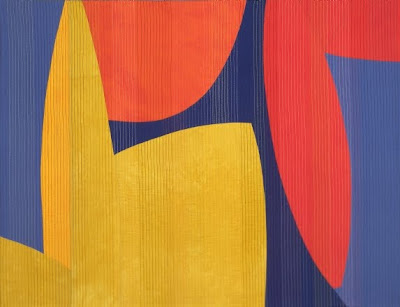 Jarrard-Dimond does not clutter her compositions with any unnecessary creative 'furniture', but keeps the work simple with shapes, colours and textures all adding their own significant contribution towards the overall composition. Rather than fill the space with a number of small elements in order to catch the eye, the artist has led with a series of large and simple incursions, many often sliding into the composition from an area outside of view.
In a number of pieces, colours and shapes have been dramatically reduced to a minimum and are often limited to two or three. However, instead of giving the compositions a near monochromatic appearance, or producing little for the eye and imagination to grasp hold of, she instead produces a highly powerful focus, creating a genuine feeling towards the macro, rather than the micro. Everything appears to be on a large and open scale, leading to a composition that is intriguing to both eye and imagination. 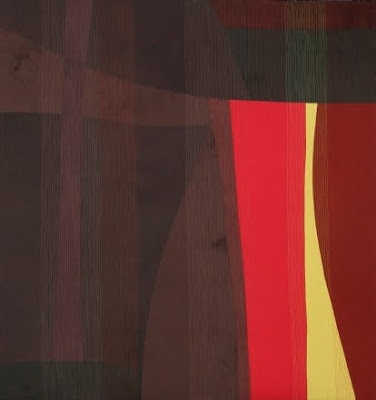 Illustration: Terry Jarrard-Dimond. Behind the Veil.
Jarrard-Dimond is open-ended within her own personal interpretation of the origins of her work. She states that each composition could be triggered by an initial response to a creative colour, song, or word, but equally the trigger could be something that catches her eye through everyday living. This open-ended approach also encompasses the viewer who the artist invites to make a personal interpretive contribution.
This invitation to personally explore Jarrard-Dimond's work cannot fail to produce suggestions and interpretations that are unique to the individual. However, the work can also be enjoyed on a number of levels from the enjoyment of surface qualities of abstract colour, form and texture, to that of a much more emotional level, where shapes, planes and dimensional depths can be explored. The choice as far as the artist is concerned, is with the individual. 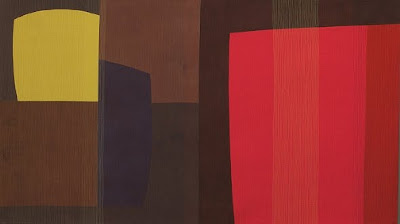 Illustration: Terry Jarrard-Dimond. Quietly Red.
Terry Jarrard-Dimond has a comprehensive website where much more of her work is available to view. She also has a number of exhibitions and workshops available for both 2010 and 2011. To follow the creative pathways of the artist it would be wise to take a look at her regularly updated blog where links can also be found to a number of interesting and related sites. Both links to website and blog can be found below in the reference links section. 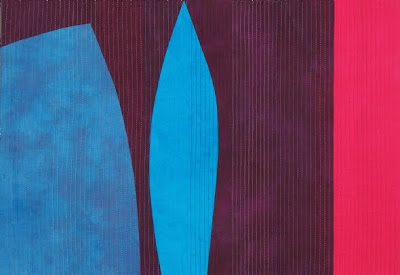 John, I love your ability to describe the essence of an artist's work. This is a wonderful critique of Terry's work. Now I know why I love it so much

Great article on one of my favorite artists, thanks for your clear perspective.

It is fascinating to read your description of Terry's art. You have put into words many of the thoughts I had when I first saw her work.But truthfully- they were so beautiful I was speechless.

Thanks for all of your comments and glad that you enjoyed the article. The next textile artist to be featured will be Brenda Smith.