Jette Clover and the Graffiti of Life 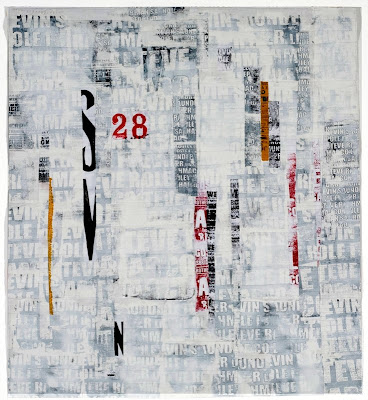 Illustration: Jette Clover. White Wall 1, 2009.
The work of the textile and mixed media artist Jette Clover deals with the graffiti of life. She has chosen to represent the visual language of the human species through the use of the written, rather than that of the spoken language. This is an important point to make, particularly as the written word becomes evermore increasingly vital to the everyday running of our contemporary world. However, although written language itself is relatively new in comparison to the age of the human species as a whole, representational markers of our presence have long been seen as a necessary part of our lives. Whether writing with recognised lettering, pictograms or other symbols, all are representations of both the individual and the culture they inhabited. It is this recognition of the potential of the individual through mark-making in whatever fashion, which seems to be at the heart of these particular pieces of textile work. 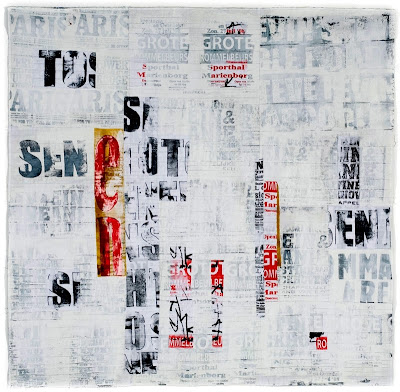 Illustration: Jette Clover. White Wall 2, 2009.
The six pieces of work shown in this article were produced by Clover in 2009. It is relatively easy to recognise the influence and inspiration of the partial layering that can be found on a poster plastered wall in any contemporary town or city. These multi-layered poster walls can easily take on the guise of fragmentary messages that are visible through layers of information. Clover has cleverly drawn analogies between this imagery from our contemporary world, and given it meaning and dimension well beyond its immediate remit. 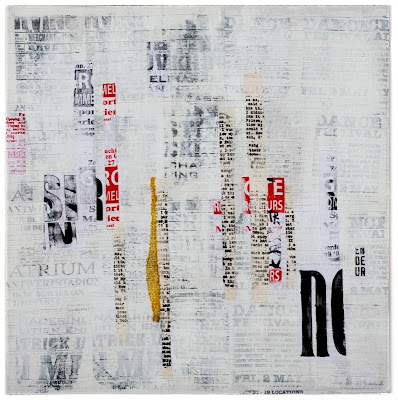 Illustration: Jette Clover. White Wall 3, 2009.
Clover is interested in not only the scattered and disconnected markers left by generations of the human species, but more importantly to all of us on a much more personal level, the wish to leave a presence of ourselves in some form. Graffiti itself can be seen as a wish fulfilment of the human spirit. I was here is perhaps the crudest but most effective form of at least partial celebrity if not full-blown immortality. To be remembered, if only partially, is all that many of us wish, and future generations may well understand us only on a level that can be recognised through Clover's work, a letter here a number there, all the rest has been obliterated. 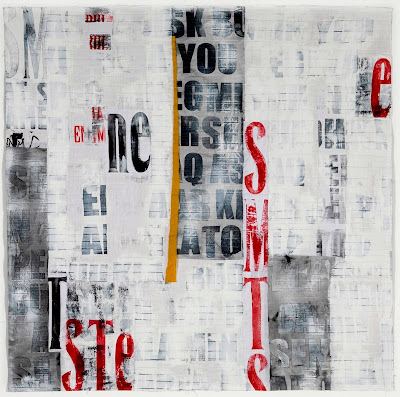 Illustration: Jette Clover. White Wall 4, 2009.
It is this obliteration that is interesting within this specific set of work by Clover. It is called the White Series, and although, to some extent it is an exercise in the exploration of the lack of colour contrasts and the simplicity that can be found in shades of white, it is also a representation of much more.
We as individual observers have to peer at the visual vocabulary that has been set out for us. Very little is made clear to us and we can only surmise as to the messages that were originally intended. This gives us a very acute awareness as to how future generations observe and portray the past. All that was our lives has been truncated and randomly edited. This is not who we were, but it is who we will eventually become. To see and interpret the human species, and through that the human condition, through a partially whitewashed wall is an extremely clever and sophisticated analogy, and all admiration has go to the artist fir portraying it as such. 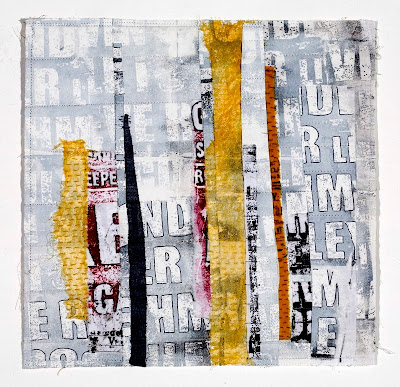 Illustration: Jette Clover. Whitewash, 2009.
The visual vocabulary shown in these pieces of work are of such a permanent and instantly recognisable nature. They so clearly represent the human capacity and longing to project meaning with words. More importantly still is the longing to project life and longevity into those words. What appears at first to be nothing more than the transitory nature of poster art becomes a need for both the continued representation and even hope for the perpetuation of countless successive generations.
Jette Clover has shown her work extensively in both North America and Europe. She has been featured in a number of publications, also on both sides of the Atlantic. She has a comprehensive website where much more of her work can be seen, along with an extensive list of exhibition highlights where her work can be seen through till Summer 2011. 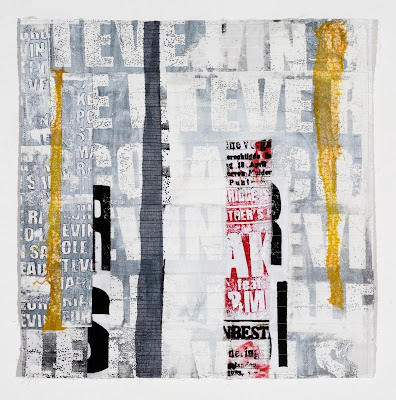 Illustration: Jette Clover. Whitewash 5, 2009.
All images were used with the kind permission of the artist.
Reference links:
Jette Clover website
Posted by John Hopper at 17:53:00

aah, the seen and the hidden, making an interesting dance into meaning...beautiful images, erudite text

'Dance into meaning' what a perfect phrase!

I love this work. It is very "cross-medium" and could be any number of different materials. Very clear intent.

I love it too. However, I have always had a particular interest in the whole idea of, as you say, cross-mediums.