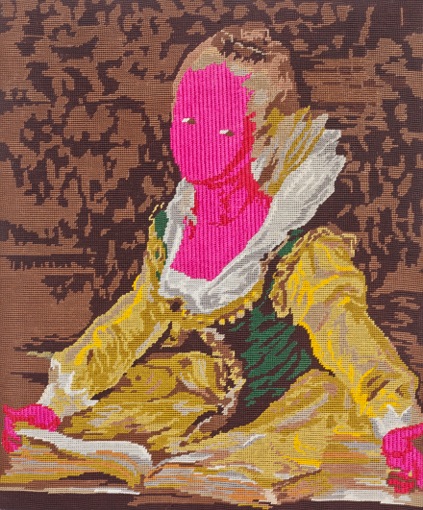 Matt Smith is a textile artist and ceramicist who has an intriguing exhibition at the Ink_d Gallery in Brighton, England, which opens, July 4 2015.

The exhibition is entitled ‘Trouble with History’ and will feature a collection of textile-based art made from vintage tapestries and domestic textile kits, which have been unpicked, reworked, and subsequently subverted from their perceived norm.

I understand that not everyone is going to be comfortable with the idea of the level of textile manipulation that Matt uses in his work, but this isn’t a quirky exhibition or one that is done for the sake of it, there are some real issues here and they tend to be issues that affect us all, that should make us think, and perhaps even make some uncomfortable. 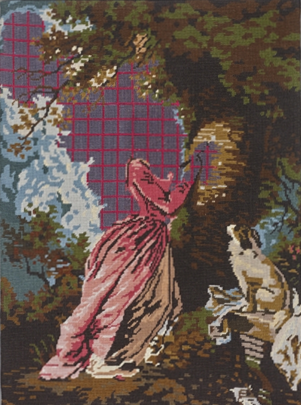 The results of Matt’s intervention and manipulation is to shift the emphasis of our standard perception of the norm. Without a real focus to the composition, is there a connection we can forge, can we identify, sympathize, or generally empathize with subject matter that seems to be missing any connection points? Does the composition merely become an exercise in disconnection?

To obscure the identity of the subjects of the work, faces and sections of the original compositions that would have been intended to have been that main focus, Matt has deliberately severed any emotional bond we may have formed with the characters that sit, play, love, and so it is in life.

Preconceptions quickly disappear in Matt’s work, we don’t know the age, sex, or skin color of the individuals featured. Without being able to connect with those markers of age, gender, or race we cannot make judgements. 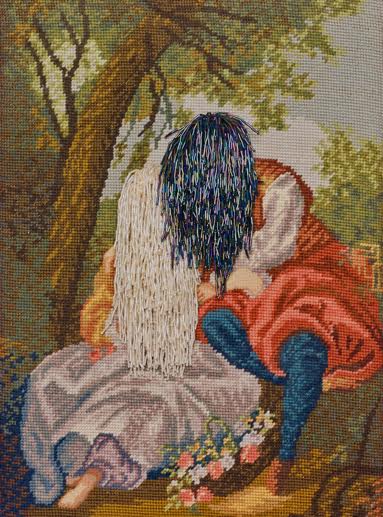 It is a way of getting us to think, to stop a moment and trouble ourselves as to the issues involved in Matt’s work. By removing our complacency of understanding, we have to think about the nameless and the unidentified in history, those who struggled to find a place in societies that were often violently hostile towards them.

By withdrawing from making connections with those in our community that we disapprove of, we in many ways disconnect them from the community, they become outsiders, they become a disapproved lifestyle at best, a plague on the norm at worst.

By losing any significant identity with the ‘different’, society loses interest in what happens to them, they often become rootless and disconnected. ‘Them’ and ‘us’ has been a constant for those who have wished to manipulate the human condition throughout history. If you can remove any personality traits from ‘them’, any empathic connection, any sympathy, or shared experience, then they become a distant, cold, unknown and unknowable entity, and therefore anything can be done to them because they obviously deserve it as they are no longer ‘us’ 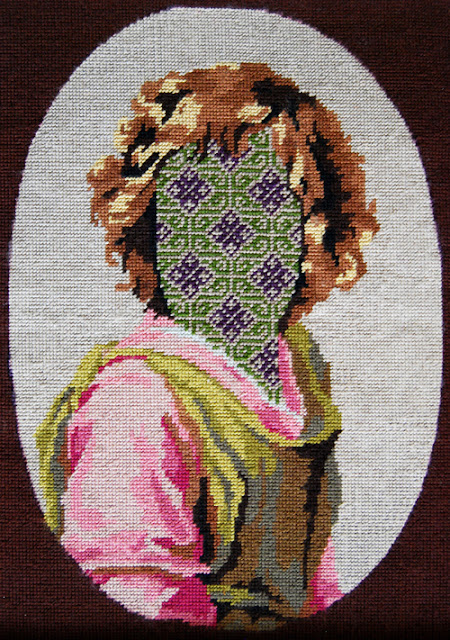 Matt is interested in issues that surround the identity and stigma so often attached to these states of being ‘different’, which is very often a state that is imposed from without, rather than within. We are all different and we are all unique, but to many societies whether in history, or in our own contemporary world, difference is a controlled substance, and uniqueness is well underplayed.

Matt’s exhibition ‘Trouble with History’ at Ink_d Gallery, Brighton runs from July 4-August 2 2015. More information can be found at the Ink_d website.

Matt has also been awarded Artist in Residence at the V&A Museum, London, from October 2015.
Posted by John Hopper at 17:08:00

i bet he colored outside the lines as a kid. so did i. AND not typical colors, if i want purple hair, i will draw purple hair.

Thank you for sharing photos of Matt's thought provoking work. Your insights add to the intrigue of considering and breaking down knee-jerk associations. Art helps us to rethink our past and adjust our future paths. Again, thank you.

I know that it is a well-trodden cliché, but I do actually think that art can change the world, or at least change our perception of how we view the world, which in my estimation is the same thing, and I am sticking to it, because that's my perception :)

I was really happy to be able to feature Matt and his thought-provoking work, and even happier to be in a position to help.

Very interesting work. I have been picking up old needlepoint at the thrift store. It is so out of fashion it seems like high kitsch. I really like the way Matt has intervened and brought new depth and insight through a medium that seems so innocuous at first glance.

Thanks for the comment Heather. It is definitely an interesting field to work in and to be inspired by, and I know what you mean about the the high kitsch status of some of the work that you can find around, some of it is startling stuff!

It is always interesting to see the perspective of different people and how we all deal with those issues of perceived and individual perspective, complex and thorny as they are sometimes.

I guess I have to say I am not a fan of this kind of work I understand the concept but think that writing about it (not textiles) would have targeted and expanded the issue more directly. But then, to each his own. I certainly appreciate the originality and content. beautylover

Work like Matt's is always going to have people approaching it from so many different routes, and that is always fascinating, whether they like it or not, or are even indifferent, each perspective has merit, which is always wonderful.

a mix of modern and history with this work, the modern bold colors and prints to replace faces displaces them in a way for us to connect with the piece of art. nice!

Thanks Theressa. I was impressed by what Matt had to say, and the way that he said it, so I was happy to share his work. I am even happier that it has gone down so well.