Kirsty Wallace - the Practise of Wear and Mend 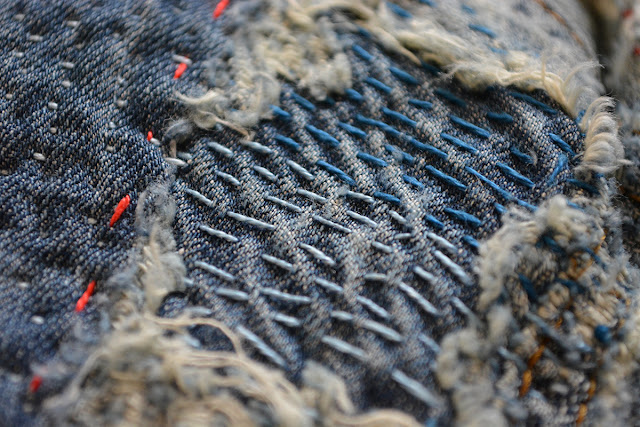 The artist Kirsty Wallace has always had an interest in the passage of time, in the ageing of materials, in the journey of visible wear and the interaction with that wear, often through the process of mending. She can remember back to her childhood when these ideas made their initial impact on her, where she instinctively came to value items and objects, the 'things' of life that had been discarded by others.

A part of that interest, at least for Kirsty, was generational. The history of her family, like so many across the planet, was steeped in a strong emphasis on make-do-and-mend, of scarcity, of the lack of luxury, certainly of the luxury to discard. There are rolling and seemingly endless generations of individuals who picked and unpicked fabrics, who added stitches, took stitches away, brought in endless new additions to the fabric, continuing its life as far as they possibly could. Many added their own styles, their own character to this process, but they also added their emotional essence, their ambience of intent and purpose. 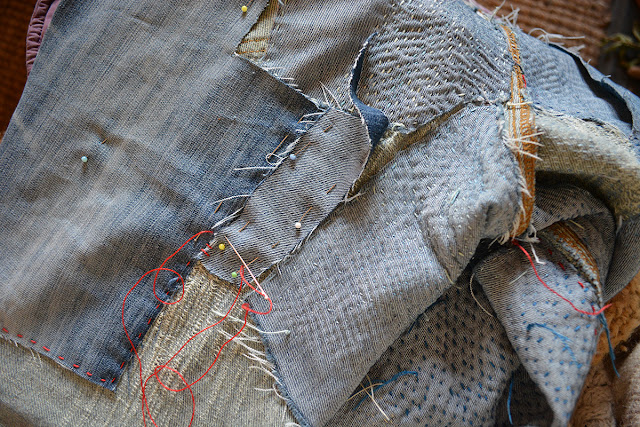 Everything in our lives is imbued with emotional layers, layers of memory, of meaning, and of connection, so that when objects and items are discarded they do not lose their emotional charge, they just lose their immediate connection. When we savour and value the discarded, we often pick up on the emotional intensity, the longevity of interaction and care that was put into a piece of fabric. It is both a humbling and energising experience and it is something at the core of Kirsty's work.

This is an artist that understands how important processes are. She became fascinated in the cycle of process that is so much a part of northern Japanese Boro textiles. She finds this particular approach to fabric, the rich layers of wear and mend, sympathetic with her own ideals. Kirsty feels that there is something both tragic and fragile connected to the Boro textiles, yet at the same time she identifies a strength that can be found within the continuation of the process. 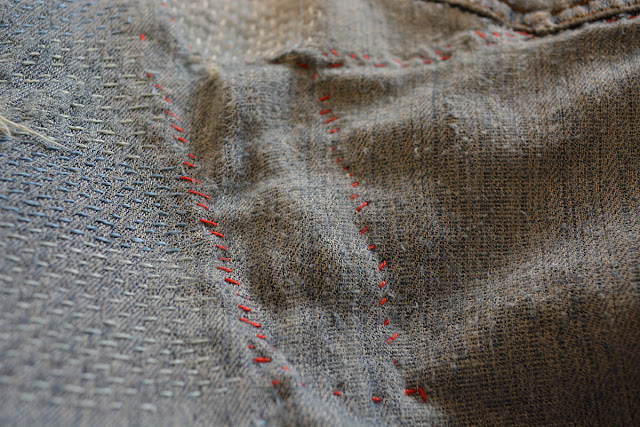 She became so inspired that she set herself the task of adopting the method herself, taking her worn out pair of jeans and seeing how long she could keep the process of wear and mend going. the practise has become much more than an exercise, it has become an emotional bond. Kirsty feels a real and definite connection with her jeans, they have become, through the process of wear and mend, a part of her being, a part of who she is, another layer of herself.

From this point she has begun to explore the much larger issue of the contemporary world's relationship to the casual discarding of mountains of fabric. The idea has become endemic that we can easily discard anything and everything in our lives, that what we throw away is somehow taken out of existence, which of course is a cruel delusion. We live in a finite world, with finite space, and we are fast approaching the point where our discarded items are just being moved around the planet in ever larger mountains of the unwanted. 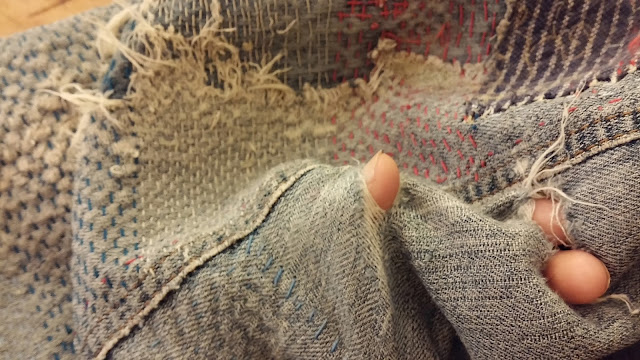 In this context she set herself the initial task of giving herself a framework to work in where she took on a one year shopping fast, integrating it into a make-do-and-mend challenge. Before the year was out, the framework became two years, and it is now a continuing process. Kirsty has followed the process so that it has become part of her lifestyle, she does not buy ready made clothes, she does not buy or accept gifts of garments or fabric.

It has come to the point where the Japanese concept of mottainai 'too good to waste' has become a natural part of Kirsty's life, and she believes that it is something that will remain with her for the rest of her life. Her commitment to understanding her relationship to fabric, to mending, to the care of the physical environment of which we are all a part, should make us all stop and re-evaluate our own understanding and relationship with fabric. It is a path worth treading and if artists like Kirsty can lead the way, then we should be grateful to her and her example. 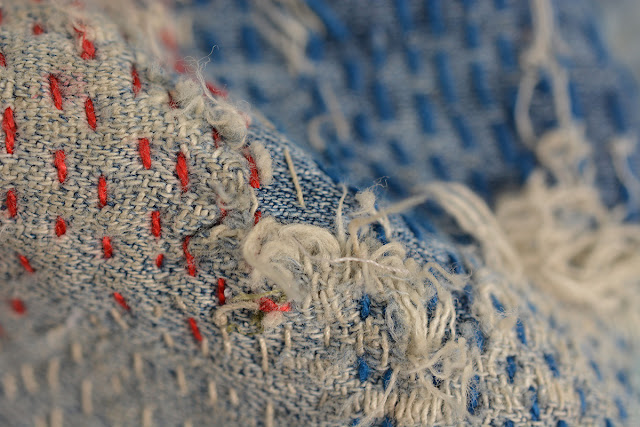 Check out Kirsty's online site Fibre Alchemy to follow her journey.
Posted by John Hopper at 18:09:00

i found a mended embroidered table runner, the care that was taken. maybe they removed a stain. i appreciate what it took. heck. i poorly mend some favorite clothes. + one day i will make a blanket of my paint stained jeans. i even mended my grandpa's old long john pants. probably from the 60's, but can't find the like anymore. or his old sweatshirts.

Thanks for this article, I am now following her blog, I love Boro and do to a certain extent mend my own clothing but mainly wear cotton jersey which is a pain to hand stitch.

Thanks for posting this blog post. It was very interesting, especially when it said "everything in our lives is imbued with emotional layers" as that is so true. So to look at the layers of fabric and see all the different images was inspiring.

Last year I got very upset about the poor quality of store-bought garments and have vowed not to buy another garment for at least a year, perhaps more. I am mending, taking out darts to expand a too-small shirt, adding pockets to existing garments,
mending pants that are showing a few holes.

So thank you for sharing Kirsty’s post about mending. Many others are practicing Boro quietly out in the world.

Thanks for all of your comments regarding Kirsty, her work, and her philosophy. It is always good to look at different ways of living our lives, different ways of approaching the day to day, even if we feel unable to take on whole philosophies of life, they can still temper and flavour our lives for the better, and often that is all that is needed, to see a different approach, a different perspective, a different way.

Beautiful on so many levels. Wow.

Thanks Elaine. I really enjoyed writing and posting this article about Kirsty's work and outlook

It was my privilege to stay with the he Wallace family last year whilst working on Scotland. So glad you have written about Kristy and get work.

It was a pleasure writing about Kirsty, and including her in The Textile Blog.